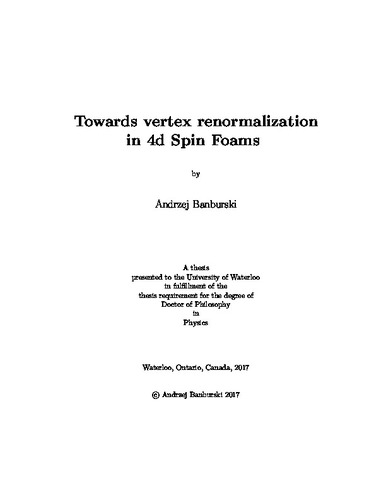 A long-standing open problem in 4-dimensional Spin Foam models of Quantum Gravity has been the behavior of the amplitudes under coarse graining. In this thesis, we attempt to study this question by using the recent reformulation of Spin Foam amplitudes in terms of spinors. We define a new model by imposing the holomorphic simplicity constraints in an alternative way, which facilitates greatly simplified calculations. We show that the simplification does not come at the cost of loss of the correct semi-classical limit, as the model has the same asymptotic behavior as the usual approach. Using the power of the holomorphic integration techniques, and with the introduction of two new tools: the homogeneity map and the loop identity, for the first time we give the analytic expressions for the behavior of the Spin Foam amplitudes under 4-dimensional Pachner moves. We show that the coarse-graining 5--1 move generates non-geometrical couplings, but we find a natural truncation scheme that restricts the flow to the space of 4-simplices. Under this truncation scheme, the 3--3 Pachner move is only invariant for symmetric configurations, while the 4--2 and 5--1 moves are invariant up to an overall possibly divergent factor depending on boundary spins. The study of the divergences shows that there is a range of parameter space for which the 4--2 move is finite while the 5--1 move diverges, which distinguishes the model from the topological case. We then show that the amplitude after the 5--1 move cannot be written as a symmetric local product of renormalized edge propagators, but instead has to be written in terms of a vertex amplitude. The study of the additional nonlocal function of the boundary spins shows a transition, at which the spin dependence is very slow, suggesting the existence of an approximate notion of a vertex translation symmetry. We conclude with a proposal for an amplitude, where iterated 5--1 Pachner moves only renormalize this nonlocal function at a vertex, and in which all the divergences can be absorbed by a single coupling constant.