Christopher Nolan and the Art of Anamorphosis 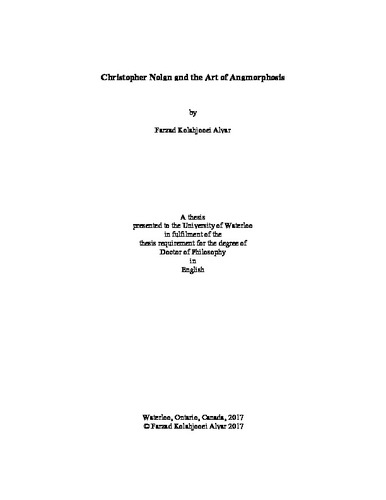 This dissertation explores the cinema of Christopher Nolan over a 15-year period. It focuses on the portrayal of the subject in five of his major films: Memento (2000), The Prestige (2006), The Dark Knight (2008), Inception (2010), and Interstellar (2014). In its chronological critique of Nolan’s cinema, this project explores subjectivity, to use Lacanian terminology, as a distorted vision provided by the desire for the impossible objet petit a. It records a shift of perspective in Nolan’s later characters, which endows them with a better understanding of their relationship with the object cause of desire. The dissertation studies the relationship between the subject and the objet petit a through the encounter with the anamorphotic gaze, which reveals the impossibility of fantasy at the heart of desire. In doing so, this project provides several ways through which anamorphosis proves to be a point that exposes the limitations of what Lacan calls the Symbolic Order. This dissertation proposes the term structural anamorphosis to introduce the Lacanian gaze as a temporal point in the film’s narrative. Structural anamorphosis is what retroactively uncovers the futility of fantasy and reveals the distorted views of the spectators. In its discussion of subjectivity, this dissertation shows that the quest for the objet petit a, which is the essence of desire, is similar to capitalism’s obsession with objects. In his films, Nolan shows how the subject’s desire is shaped by ideology unconsciously. By doing so, Nolan dismantles ideology and provides a space for rethinking the surrounding world: the spectators who watch the films of Christopher Nolan understand that they need to reconsider what they have taken for granted as normal.