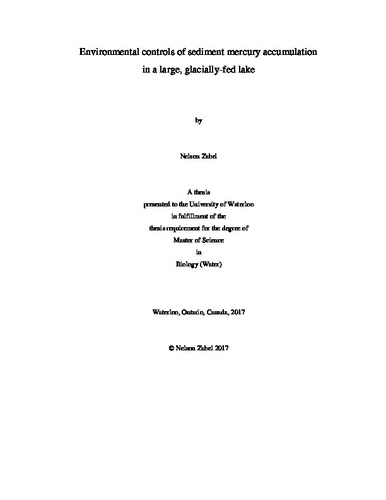 Mercury is an environmental contaminant of concern, especially in northern regions where human exposure to mercury through fish consumption can be high. Mercury accumulation in northern lakes has increased over the past 100 years, largely due to increased anthropogenic emissions of mercury to the atmosphere and subsequent deposition of mercury on remote lakes and catchments. In this study, I investigated approximately 1,200 years of sediment history in Kluane Lake, a large, dynamic, glacially-fed lake in the southwestern Yukon. This lake is an important traditional food source to Kluane First Nation, and citizens have become concerned about environmental contaminants, and with recent changes in glacial meltwater feeding Kluane Lake. Previous research has described two hydrological periods in Kluane Lake during the past 1,200 years: the Duke River period (ca CE 750 to CE 1650) and the Ä’äy Chù period (ca CE 1650 to CE 2015). Using a multi-proxy paleolimnological approach, I characterized the spatiotemporal variation in sediment mercury dynamics in Kluane Lake with sediment cores collected from several regions (Southern, Middle, Talbot Arm regions) in the lake. During the Duke River period, sediment accumulation and composition appeared to be relatively stable throughout the lake. Glacial sediments transported via the Duke River diluted mercury delivered to the lake from catchment soils and bedrock. The transition to the Ä’äy Chù period, marked by a reversal of inflows and outflows, was characterized by increased variability in sediment accumulation and composition, with numerous earthquakes preserved in core stratigraphies. In the Middle region of the lake, mercury accumulation rates and concentrations did not differ between the two hydrologic periods, while in the Talbot Arm, mercury accumulation rates and concentration were significantly higher during the Ä’äy Chù period. Mercury delivered to Kluane Lake during the Ä’äy Chù period appeared to be derived from terrestrial particles, including organic matter, and the sediments transported by the Ä’äy Chù. The recent piracy of the Kaskawulsh Glacier meltwaters by the Kaskawulsh River in spring 2016 has marked a new hydrological period in Kluane Lake: continued monitoring is necessary to determine the effects on mercury cycling and bioavailability, and the implications for communities that rely on the lake.