The effect of isothiocyanates on heat shock protein, heme oxygenase-1 and α-tubulin levels and localization in Xenopus A6 kidney cells 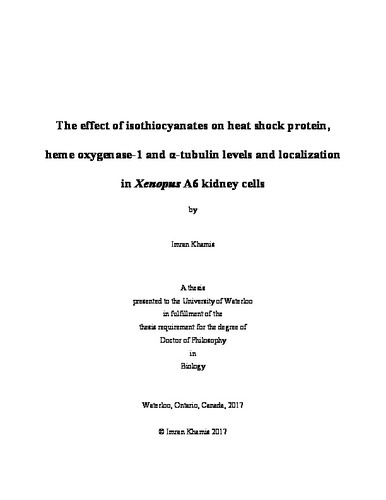 Numerous studies have elucidated the health promoting properties of organosulfur compounds derived from cruciferous vegetables known as isothiocyanates (ITCs). As electrophiles, the impact of ITCs at the molecular level is profound, with the ability to directly bind and modify thiol-containing compounds such as glutathione and cellular protein, including tubulin. While the biochemical effects of ITCs have been well characterized, less information is available regarding their effects on the accumulation of stress-inducible heme oxygenase-1 (HO-1) and heat shock proteins (HSPs) as well as the possible formation of aggregated protein due to thiol modification. In the present study, I examined the effect of benzyl isothiocyanate (BITC), phenethyl isothiocyanate (PEITC), and sulforaphane (SFN) on the accumulation of HO-1, HSP70, HSP30 and HSPB6 in A6 kidney epithelial cells derived from the frog, Xenopus laevis. Immunoblot analysis revealed that treatment of cells with each of the ITCs induced the accumulation of HO-1 and HSP70 while HSP30 levels were only enhanced in cells treated with BITC at 30 °C. In contrast, HSPB6 levels were not affected by ITCs. Pretreatment with transcriptional (actinomycin D), translational (cycloheximide) or HSF1 (KNK437) inhibitors prevented the ITC-induced accumulation of HO-1, HSP70 and HSP30. Immunocytochemical studies determined that ITC treatment also resulted in F-actin disorganization and membrane ruffling. Furthermore, the addition of BITC or PEITC to A6 cells enhanced the presence of ubiquitinated protein and induced the accumulation of aggregated protein. In an examination of the effect of BITC or PEITC on microtubule filament protein, immunoblot analysis revealed significant decreases in the relative levels of α-tubulin. Immunocytochemical analysis revealed that BITC induced the collapse and fragmenting of the microtubule filaments while PEITC had a lesser effect. However, treatment of cells with BITC or PEITC at 30 °C greatly enhanced microtubule fragmentation. Normally, the accumulation of aggregated protein results in their coalescence forming large aggresomes, which move along microtubules to the perinuclear region. However, this phenomenon was not readily observed with BITC or PEITC possibly due to microtubule fragmentation. This possibility was supported by the finding that BITC pretreatment reduced the formation of aggresome-like structures induced by the proteasomal inhibitor, MG132. The final chapter of this thesis investigated characteristics of the Xenopus small heat shock protein HSPB6, a HSP whose levels were not affected by ITC treatment of A6 cells. HSPB6 was determined to be an ortholog of mammalian HSPB6 and encoded a 168 amino acid protein that contained an α-crystallin domain, a polar C-terminal extension and possible phosphorylation sites. It shared 94% identity with X. tropicalis HSPB6 but only 49% and 59% with zebrafish and human proteins, respectively. Phylogenetic analysis revealed that X. laevis HSPB6 grouped more closely with mammalian and reptilian HSPB6s than with fish HSPB6. Western blot analysis determined that HSPB6 was present constitutively in A6 cells, induced by MG132 and slightly by cadmium chloride treatment but not by heat shock. Immunocytochemistry revealed that HSPB6 was present in the perinuclear region of the cytoplasm with some in the nucleus. The research detailed in this thesis examined the effect of BITC, PEITC and SFN on the accumulation of HO-1 and HSPs and documented the impact of BITC and PEITC on aggregated protein in a kidney epithelial cell line. Since a great deal of the molecular and cellular research with Xenopus is applicable to humans, an increase in our knowledge of the effects of ITCs is of importance given their potential role as therapeutic compounds in the treatment of cancer, neurodegenerative diseases and bacterial and viral infections.