On the Determinants of Effort 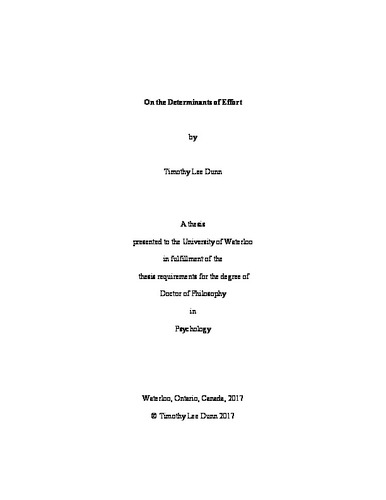 That humans configure their behaviors in ways to avoid effortful actions is undoubtedly one of the most pervasive hypotheses put forth to account for a wide range of human behaviors. This dissertation describes a series of experiments aimed at testing accounts of how individuals make effort-based decisions, and why actions may be evaluated as effortful. In Chapter 1, I contrasted the hypothesis that individuals’ effort avoidance behaviors and conceptions of effort are driven by the performance associated with different lines of actions, versus the hypothesis that individuals generate a kind of metacognitive evaluation of effort that can be dissociated from performance. I found that individuals’ choices were not associated with their performance or with a physiological measure of demand, but rather tracked closely with subjective perceptions of effort associated with embedded cues supporting the latter hypothesis. Chapter 2 extended the idea that individuals make their effort-based decisions by utilizing cues through pitting options against one another that vary on cue saliency, demands on executive control, and performance. Chapter 3 looked to test how individuals evaluate expected effort across a range of tasks through manipulations of evaluation mode (i.e., whether options are evaluated comparatively or in isolation). Following from these results, I propose that evaluable forms of effort are driven by the presence of a failure point associated with the task. In Chapter 4, specific determinants of effort were examined by crossing anticipated time demands and error likelihood across different choice options. Data supported the notion that judgments of effort are closely related to the perceived likelihood of an error associated with a task, but not to the time demands. I conclude by proposing that cognitive effort can best be conceived of as a type of inferential metacognitive evaluation made over available cues that are weighed on the perceived likelihood of making errors.