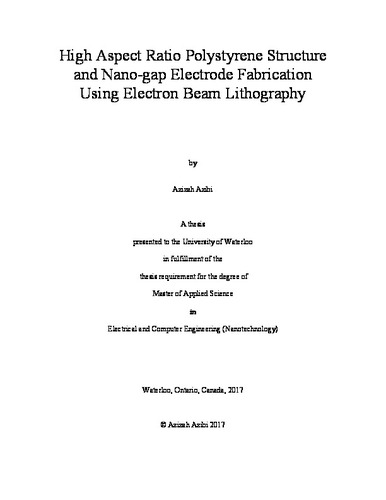 Nanotechnology has experienced a rapid growth over the past decade, thanks to the development of nanofabrication technologies needed to fabricate nano-devices. The key technique for nanofabrication is nano-lithography. Among the various lithography methods, electron beam lithography (EBL) is the most popular one for R&D and prototyping. EBL uses a focused electron beam to expose a polymer material called resist, such that it undergoes chemical reaction to render it soluble (positive resist) or insoluble (negative resist) by developer. One particular challenge for EBL is the fabrication of high aspect ratio (structure height over width or diameter) nano-structures, which often suffers from pattern collapse caused by capillary force during rinsing liquid drying. In this study we report a novel approach to tackle this issue to a certain degree. We form an array of thin “ceiling” on top of the tall resist structures (here an array of pillar) to “hold” them together and thus reduce the structure collapse. Meanwhile, development can still be completed by optimizing the size of the ceiling patches such that developer has enough time to enter and dissolve the unexposed negative resist under the ceiling. The “ceiling” can be formed by low-energy electron beam exposure that will cross-link only the upper portion of the thick resist; whereas the tall resist structure is exposed at high energy having deep penetration depth. Pattern collapse or detachment was greatly reduced by using our technique, though some degree of structure deformation was found after development. Using high aspect ratio resist structures, it is possible to fabricate high aspect ratio functional materials such as silicon.