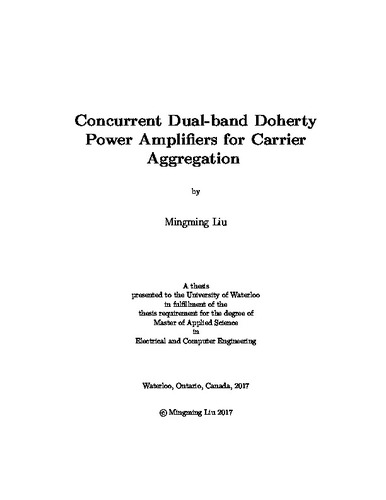 Carrier aggregation is the main feature of the Long Term Evolution advanced (LTE-A) standard to increase the spectral efficiency and communication bandwidth. It calls for wireless transmitters to be multi-band and multi-standard to meet the demands of various deployment scenarios. In addition, these transmit radios must efficiently amplify signals characterized with a high peak-to-average power ratio (PAPR), which is caused by advanced modulation schemes. These two factors highlight the need for the multi-band Doherty power amplifier (DPA), which allows the transmitter remain in high efficiency at back-off power levels and maintain that high efficiency over multiple frequency bands. In this work, a novel output combining network is presented for the dual-band DPA design with extended fractional bandwidth for carrier aggregated signals. The proposed output combiner employs a modified Pi-shape network, which enables the absorption of output capacitances from both the main and peaking devices and eliminates the need for phase offset lines which are major sources of bandwidth limitation in the existing multiband DPAs. In addition to performing the impedance inversion, the proposed combiner incorporates the biasing feeds and presents small low-frequency impedances to both the main and peaking transistors. The inclusion of the bias feeds and small low low-frequency impedance feature improves the linearizability of the DPA when stimulated with concurrent dual-band modulated signals. Lastly, by using the gain contour at the back-off power level, the non-linear AM-AM response caused by the varying input capacitance of the main transistor is mitigated. The proposed dual-band output power combiner and the back-off gain contour technique were applied to design of a dual-band two-way Doherty PA using the commercialized 25W Gallium Nitride (GaN) transistor. Measurement of the two-way DPA shows a gain of 7.5- 9.5 dB at 2.05 - 2.3 GHz and 9 - 11 dB at 3.2 - 3.62 GHz. The efficiency at 6 dB back off is greater than 49% and 47% across the two frequency bands. The linearizability of the dual-band DPA is validated using various carrier aggregated signals. The PA exhibits linear behaviour when driven by up to 80 MHz intra-band carrier aggregated signal and 20 MHz concurrent dual-band signal after DPD. Additionally, carrier aggregated signals usually lead to a PAPR value between 8-10 dB. The efficiency of classic two-way DPA deteriorates when dealing with such signals. To cope with the efficiency deterioration, a three-way DPA was designed. Simulations of the three-way DPA show that the gain is greater than 9 dB within the two frequency bands, 2.05 - 2.32 GHz and 3.35 - 3.65 GHz. The efficiency at 10-dB back-off is greater than 40% in the two frequency bands.