Contributions to the Theory of Radicals for Noncommutative Rings 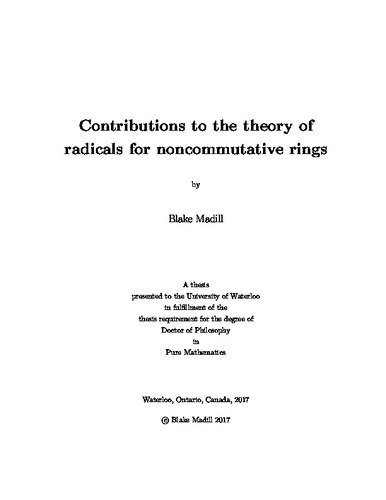 We consider several radical classes of noncommutative rings. In particular, we provide new results regarding the radical theory of semigroup-graded rings, monomial algebras, and Ore extensions of derivation type. In Chapter 2 we prove that every ring graded by a torsion free nilpotent group has a homogeneous upper nilradical. Moreover, we show that a ring graded by unique-product semigroup is semiprime only when it has no nonzero nilpotent homogeneous ideals. This provides a graded-analogue of the classical result that says a ring is semiprime if and only if it has no nonzero nilpotent ideals. In Chapter 3, the class of iterative algebras are introduced. Iterative algebras serve as an interesting class of monomial algebras where ring theoretical information may be determined from combinatorial information of an associated right-infinite word. We use these monomial algebras to construct an example of a prime, semiprimitive, graded-nilpotent algebra of Gelfand-Kirillov dimension 2 which is finitely generated as a Lie algebra. In Chapter 4, the Jacobson radical of Ore extensions of derivation type is discussed. We show that if $R$ is a locally nilpotent ring which satisfies a polynomial identity, then any Ore extension of $R$ of derivation type will also be locally nilpotent. Finally, we show that the Jacobson radical of any Ore extension of derivation type of a polynomial identity ring has a nil coefficient ring.