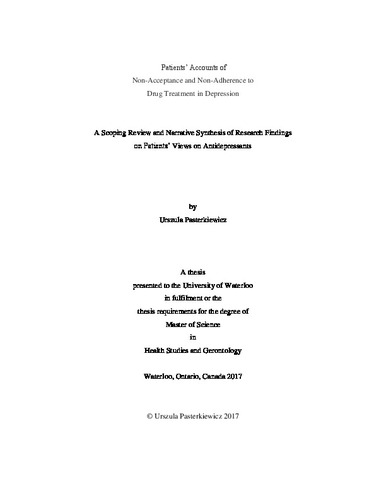 Major depressive disorder (MDD) is a disabling condition with a high frequency of recurrence and non-recovery, resulting in serious morbidity and mortality (Kessler & Bromet, 2013; Stotland, 2012; Alonso et al., 2013). Depressive patients are said to report persistent symptoms and long-term disability despite high primary care utilization and medicines, and this notion is challenging the efficacy of existing models of care (Stirling et al., 2001; Ambresin et al., 2015). Despite increased numbers of issued prescriptions, the prevalence of depression remains static (Ambresin et al. 2015; Baxter et al., 2014; Wittchen et al., 2011), or demonstrates progressive course (Mojtabai et al. 2016; Hidaka, 2012). This striking polarity of findings opens space for further research. Former studies designed to promote medications for the treatment of depression generated rather discouraging findings (Aikens et al., 2008; Kutcher et al. 2002; Brook et al. 2005; Pampallona et al., 2004; Katon et al., 2001). It seems imperative to undertake a careful analysis of reasons, for which the low effectiveness of treatment may result from its low utilization. A better understanding of individual views on antidepressants may help improve adherence as well as patient-centeredness in depression care and suggest innovative, more effective intervention strategies. Purpose of the study: This review summarises patients’ accounts of experiences with drug therapy in depressive disorder. Perceptions of mood-stabilizing drugs have been explored with the aim to unravel negative treatment decisions. Individual and common beliefs that lead to refusal of antidepresant treatment as well as challenges experienced during initially accepted and initiated treatment have been identified and explained. Methods: With the help of Arksey and O’Malley’s scoping review methodology as a guide, several databases were searched: MEDLINE through PubMed, Scopus, PsycNET and Google Scholar. In addition, bibliographies and references of relevant studies were searched online. As a result, 41 qualitative research papers remained the core of this work. Design triangulation was used to examine the consistency and reliability of qualitative data with 71 quantitative and mixed-methods studies. Concepts emerging from summarized findings are presented in a thematic analysis. The research was conducted in a manner that will allow this review to be replicable. Findings: Utilization of antidepressants continues to raise concerns. Existing scholarly evidence concerning attitudes and people’s behavior in relation to mood-stabilizing drugs uncovered a rich spectrum of ethical, racial, cultural and emotional underpinnings of medical treatment. There were accounts of patients who both accepted and refused drug treatment in the process of acceptance or denial of their depressive condition. Pattern of ignorant or dismissive behaviors observed in health care professionals was the cause of major frustration. Conclusions: depressive patients either fully refuse the medicines or they do not adhere to recommended treatment. The analysed studies provide evidence that adherence to antidepressants is a complex health behavior that is mediated by multiple factors based on patients’ cultural, religious and ethical beliefs. The most serious reasons for non-compliance are adverse side effects and frustration experienced due to lack of efficacy of drug treatment and absence of permanent cure after prolonged use of medications. A major concern is the quick diagnostic procedure based on patient’s self-report and the ease of prescribing antidepressants viewed by patients as unnecessary and harmful. Complains about lack of continuous medical support indicate an urgent need of revision of existing mental-health services and regulations.

Urszula Barbara Pasterkiewicz (2017). Patients’ Accounts of Non-Acceptance and Non-Adherence to Drug Treatment in Depression A Scoping Review and Narrative Synthesis of Research Findings on Patients’ Views on Antidepressants. UWSpace. http://hdl.handle.net/10012/12023