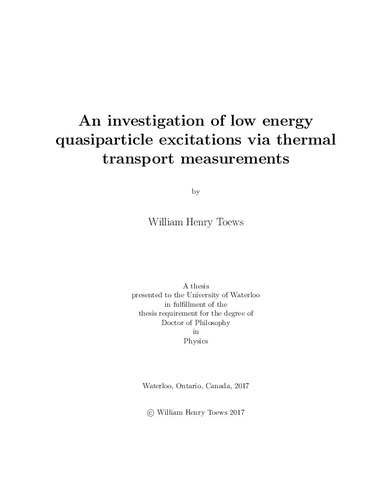 Thermal transport measurements can provide a unique perspective of the nature of a system by exploring the behaviour of the low energy excitations from the ground state. Delocalized quasiparticle excitations can affect the conductivity either by providing an additional channel of heat conduction, or by scattering the phonons. Thus, extensive thermal conductivity measurements have been conducted on a number of materials in order to examine their exotic ground state manifolds by probing the low lying excitations. Thermal transport measurements of the classical spin ice materials Ho$_{2}$Ti$_{2}$O$_{7}$ (HTO) and Dy$_{2}$Ti$_{2}$O$_{7}$ (DTO) have revealed evidence for a non-negligible contribution to the conductivity from magnetic excitations in excess of the phonon conductivity. Hysteresis is observed below 360 mK upon cycling the field above 1.5 T for HTO, and 1 T for DTO, due to a first order phase transition from the Kagom\'{e} phase into a field induced long range ordered phase. Hysteresis can be induced at higher temperatures by increasing the field sweep rate, which is shown to cause spikes in the sample temperature resulting from out of equilibrium thermal runaway processes. The high field conductivity of HTO shows an enhancement in the conductivity until it saturates above $\sim 4$ T indicative of the suppression of spin-phonon scattering. On the other hand, the high field conductivity of DTO decreases to a constant value, suggesting a much weaker spin-phonon coupling in DTO compared to HTO. Thus, the field independent data at high field only accurately depicts the zero field phonon conductivity in DTO. As in any real material, imperfection in the crystal lattice will always be present. The effect of disorder in the lattice has on the monopole excitations in the spin ice manifold is explored by considering two DTO samples with differing levels of disorder. The level of disorder in each sample is initially characterized via x-ray diffraction measurements as well as high temperature conductivity measurements which probes defect scattering of phonons. The magnetic channel of conductivity in the sample with less disorder follows an exponential temperature dependence with an activation energy comparable to the energy gap of a monopole excitation as intuitively expected for an activated quasiparticle excitation. The magnitude of the magnetic conductivity in the sample with a higher level of disorder is greater than the less disordered sample and also follows a power law temperature dependence. This indicates that the impurities tend to enhanced monopole density possibly by acting as nucleation sites. An analogy is made to the enhanced carrier concentration in a doped semiconductor. The observation of a strong sample dependence of many physical properties in the quantum spin ice material Yb$_{2}$Ti$_{2}$O$_{7}$ (YbTO) has been proposed to be in part caused by disorder in the lattice from the floating zone growth technique. Thus, in order to examine the effect of this disorder on the magnetic excitations, thermal transport measurements were conducted on two separate YbTO samples; one sample was measured as grown, and the other sample was measured after annealing in oxygen. The annealed sample exhibits a sharp step-like drop in the conductivity at approximately $T_{c}\sim200$ mK whereas the as grown sample shows a broad feature indicating a change in the power law of the temperature dependence. The field dependence of the conductivity above 200 mK reveals a substantial contribution from dispersive quantum monopoles which can be suppressed with the application of a small field. The monopole suppression rate increases monotonically as the temperature approaches $T_{c}$, consistent with ferromagnetic fluctuations indicative of the onset of a long range ordered ferromagnetic phase. This is corroborated by the disappearance of the monopole excitations below 200 mK. Electrical resistivity and thermal conductivity measurements were conducted on three single crystals of the topological Kondo insulator, SmB$_{6}$; two sample grown in an image furnace, and one grown via the flux method. The resistivity increases exponentially with decreasing temperature, reaching a saturation value below 4 K. This is due to an electrically insulating bulk with a gap of approximately 4 meV and topologically protected electrical surface states. The zero field thermal conductivity is well described by phonons in the boundary scattering limit. However, the floating zone grown samples show a field induced enhancement of the conductivity which is four orders of magnitude larger than what is expected from the electronic surface states via the Wiedemann-Franz law. Thus, this additional conductivity channel is from charge neutral excitations which are magnetic in nature. Furthermore, the temperature dependence of the magnetic conductivity is not described by magnons or spinon excitations. The flux grown sample does not exhibit the same field enhancement of the conductivity suggesting that variations in the sample composition can affect the magnitude of the charge and spin excitations gaps.