One Hand Occupies the Void 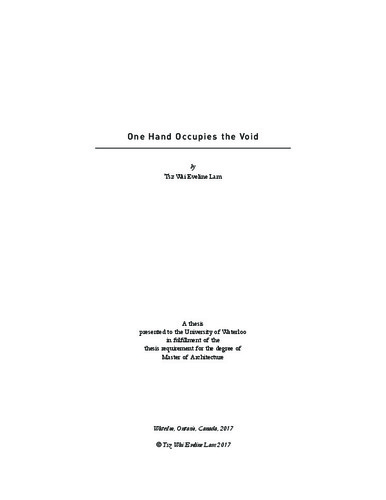 The interconnected nature of void and matter and form is implied in architecture, but rarely explicitly expressed. Since the void is neither form nor material, it is difficult to define, but it occupies a critical role in urban development as the counterpart to the urban mass. The narrative of the modern city can be told through the presence of urban voids: the transposition of material and built form resulting in two typologies of the void, the found and the formal. The first exploration of the found void is dedicated to the analysis of the clay pit, the companion of bricks, which is often ignored as an unwanted by-product of the construction process. This deliberate exclusion from the urban narrative is reversed once it is rehabilitated as a formal void, which is valued as an element of urban development. The second exploration analyses the condition of the formal void, using the ceramic vessel to construct a domesticated spatial model of the monumental public space. The identity of the city is therefore analysed by making visible the imperceptible void through the documentation of traces and boundaries. The found void is a by-product of the city’s development and is not planned; it can also be described as a procedural void whose physical impact is rarely, if ever, considered as a positive influence on the growth of the city. From the economic point of view, its temporary use produces resources that transform the urban fabric, but the found void itself requires reintegration into the city either through erasure or reversal to solid. The analysis of the former, now filled-in, 19th-century clay quarry in east Toronto serves as the first investigation of the urban void, where the industrial process of clay extraction acts as a force that influences the form of the quarry and also the surrounding neighbourhood. The formal void is a tool that transforms the city through the imposition of a hierarchical structure derived from a deliberate absence within the existing fabric. The valorization of the formal void as a solution to congestion and chaos in the built-up urban structure is based on its perception, even now, as an ideal space that promotes circulation, light, and air. The analysis of an alternative vision of Paris conceived by Pierre Patte in 1765 expresses the interjection of the void into a pre-existing urban fabric and how its form is connected to the buildings that it displaces. The practice of throwing clay on a wheel depicts the reciprocity between matter, form, and void: clay is shaped into a hollow vessel through the interaction of the body. The found void, as a fragment evolving over time, is compared to the process of throwing and analysed according to the redistribution of the material around the perceptible void. For the formal void, the final pieces are used as models to express the circulation and tension that becomes evident when conceptual forms are given material bodies. This process occupies the intersection between the theory of the void and the material of the clay medium and thereby offers a critical solution to the architectural paradox that engages the nature of the profession and the approach to space itself.