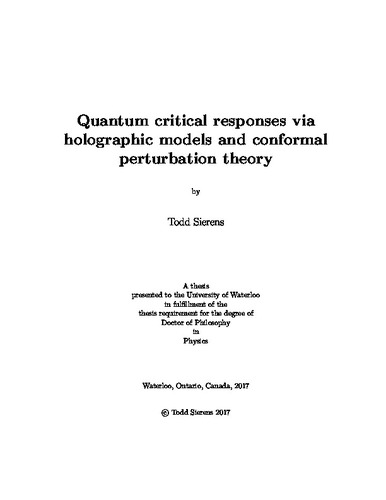 We investigate response functions near quantum critical points, allowing for finite temperature and a mild deformation by a relevant scalar. When the quantum critical point is described by a conformal field theory, we use conformal perturbation theory and holography to determine the two leading corrections to the scalar two-point function and to the conductivity. We build a bridge between the couplings fixed by conformal symmetry with the interaction couplings in the gravity theory. Knowledge of the high-frequency response allows us to derive non-perturbative sum rules. We construct a minimal holographic model that allows us to numerically obtain the response functions at all frequencies, independently confirming the corrections to the high-frequency response functions. In addition to probing the physics of the ultraviolet, the holographic model probes the physics of the infrared giving us qualitative insight into new physics scalings. We briefly investigate the hydrodynamic modes that occur in the field theory by observing the diffusive nature of the gauge field deep in the bulk using the membrane paradigm, allowing us to calculate the diffusion constant and DC conductivity.