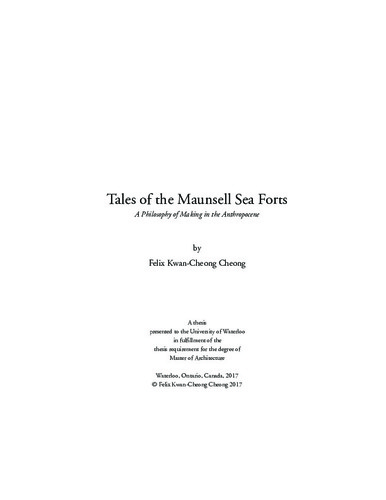 The Age of the Anthropocene is marked by a shift in power between the relationship of nature and man. For the first time in human history we are actively shaping the environmental systems around us on a planetary scale, causing repercussions beyond our scope of understanding. As such the implications for how we as a species should live in this paradoxical age of scarcity and abundance are undefined. Although mention of the Anthropocene has pervaded into popular culture in recent years, the study of this geological era is still in its infancy. Elsewhere, in the Thames Estuary twelve miles off the nearest coast, a collection of peculiar structures can be found. They are the Maunsell Sea Forts; a series of abandoned military installations created during World War II. Primarily constructed out of steel and concrete the towers seemingly appear out of the water. These outposts had a successful career defending the United Kingdom against German air-raids throughout the war until they were later decommissioned, stripped of their armaments, and left to the elements. Since then, the towers have been sporadically appropriated for a variety of different purposes while steadily falling into ruination. With an aesthetic almost as fantastic as their history, the Maunsell Sea Forts have a unique ability to capture the imagination. Utilizing the Anthropocene as the backdrop, the Maunsell Sea Forts as the protagonist, and fictional tales as the vehicle, this thesis investigates what it means to be a designer and builder in the current global context. It explores concepts surrounding transformative use, material realities, and productive ruination in order to develop a philosophy of making founded on an acceptance of impermanence. Told through a mixture of essays, stories, and illustrations, this thesis creates a platform to speculate at the role of the architect for the modern age.

Felix Kwan-Cheong Cheong (2017). Tales of the Maunsell Sea Forts A Philosophy of Making in the Anthropocene. UWSpace. http://hdl.handle.net/10012/12011