Second homes in Mexico: An exploration of the social connections of international residents in the city of Merida 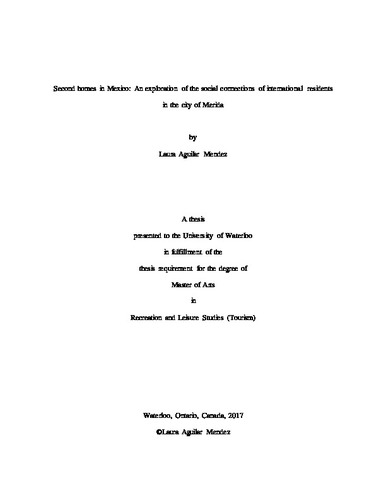 Owners of second homes construct complex relationships with the people and place they live in especially when the property is located across national borders. While previous research on second homes identified numerous negative impacts associated with the expansion of this phenomenon (Coppock, 1977; Gallent & Twedwr-Jones, 2000; Hall & Müller, 2004), recent studies have turned to examine the social effects of second homes in connection with social capital and the potential contribution that second home owners might bring to the host communities (Gallent, 2014; Huijbens, 2012). This qualitative study explored the social connections of international second home owners in the city of Merida, Mexico placing emphasis on the concept of social capital. Through eleven semi-structured interviews with temporary and permanent residents, the study sought to contribute to our understanding of the second home social experience from the owner’s perspective in an international context. Three main themes emerged during the analysis of the data: connecting with others, encountering challenges, and accumulating social capital. Findings revealed that international second home owners were building multiple relationships with local and foreign residents at the second home destination. Additionally, challenges related to communication in Spanish, cultural differences, and tensions among groups of foreigners hindered social interactions and the creation of social ties. Findings also suggested that international second home owners had the potential to accumulate social capital in the city. At an individual level, participants were getting social support and accessing resources through informal social networks. In a collective sense, they were helping the community in voluntary groups and informal projects. Recommendations for both foreign residents and local authorities were also included. Future areas of research include examining the locals’ perspective of the presence of second home owners in the city, selecting second home owners from a wide variety of nationalities, and studying the phenomenon in areas with lower density of second homes.

Laura Aguilar Mendez (2017). Second homes in Mexico: An exploration of the social connections of international residents in the city of Merida. UWSpace. http://hdl.handle.net/10012/12002