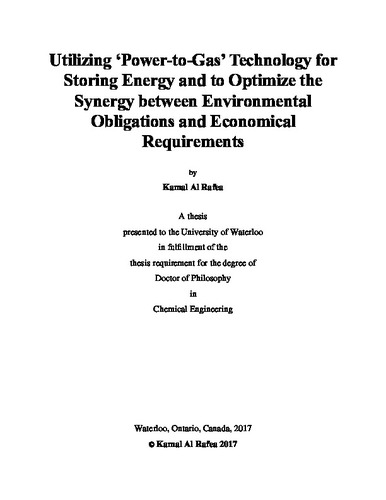 This work develops a generalized modeling framework using several approaches for assessing the feasibility of storing energy in order to demonstrate the economic and environmental benefits of managing the existing power generation sources in Ontario. Optimizing the costs and emissions while maintaining energy demand is the main and general target for this study. The purpose of this research is to provide the energy systems management and decision makers an effective tool for assessing the optimum way of utilizing existing energy sources in Ontario. The major contributions from this research are: to assess the feasibility of integrating renewable energy sources into Ontario power grid in terms of cost and emissions, and optimizing energy storage capacity in the natural gas network within the power-to-gas concept. Power to Gas as an energy storage is a novel technology that is considered to be a viable solution for the curtailed off-peak surplus power generated from intermittent renewable energy sources, particularly the wind and solar. The unique technology of ‘power-to-gas’ represents a promising system for managing storing energy when addressing the current challenges of demand satisfaction, grid-flexibility, related emissions, and costs. In the first part of the research, the integration of intermittent renewable energy sources of wind and solar into a larger scale fossil-fueled combined cycle power plant (CCPP) utilizing hydrogen as an energy vector is explored in order to meet the needed load following energy profile at minimum costs and lower emissions. GAMS is used to model energy hub costs to approach the problem using mathematical programming while power cost and emission credits represent the model outputs. The cost-emissions models will aid in sizing of the key components within the hub and optimizing its operation. Two different types of modeling are used, Mixed Complementary Problem (MCP) and Mixed-Integer Linear Programming (MILP) in simulating the configuration of the proposed energy systems, while monetizing health impacts associated with exposure to conventional energy sources emissions. In order to bring attention to the risks that associated with utilizing NG-fueled energy sources such as combined cycle power plant CCPP, the third part of the research is developed to assess the monetary value of the risks of the expected pollutants on human mortality and morbidity. The pollutants of carbon monoxide (CO), nitrogen dioxide (NO2), fine particles (PM2.5), and sulfur dioxide (SO2) from a sample of natural gas NG, were chosen based on their emission rates and their severity on the health impacts. To lessen the health impact from natural gas fuel, hydrogen-enriched natural gas (HENG) fuel was examined to fuel the combined cycle power plant. The Health Canada’s Air Quality Benefits Assessment Tool, AQBAT was used for monetizing the impacts of pollutants on health by taking into account a range of morbidity and mortality outcomes as well as their dollar value, when the natural gas and the hydrogen enriched natural gas fuels were used. The final part of this research is designed to measure the feasibility of new decentralized power system as a critical mechanism in meeting energy demand and as a step forward towards an energy sustainable future. Decentralized power systems are characterized by generating power near the demand area, it can operate by interactions with the local grid, in which it feeds surplus power generated to it, or it can behave as a stand-alone isolated energy system. The development of community power requires the consideration of several sustainability criteria in order to meet the minimum requirements that satisfy communities’ demands and maximize energy generation benefits. These criteria include cost-effectiveness, risks to the environment and humans, scaling, efficiency, and resilience. The existing natural gas distribution system is utilized to store and to distribute hydrogen produced via electrolysis with and without the consideration of additional hydrogen storage while considering two recovery pathways: ‘power-to-gas-to-power’ and ‘power-to-gas-to-end users’ to satisfy power and end-users demands. The multi-objective and multi-period mixed integer linear programming model is employed to minimize the cost of generating electricity and storage, the cost of health impacts associated with emissions, and the cost of power losses from renewable intermittent energy sources. The proposed model is designed to evaluate the optimal operation and sizing of the energy producers and the energy storage system, as well as the interactions between them. The cost of generating electricity is found to depend on the operational hours of energy sources and on the estimated cost of electricity varied from $0.092 to $0.11 per kWh. Blending hydrogen with natural gas to fuel combined cycle power plant could save on human’s health and environment, at the hydrogen concentration of 2.3%, it could save CAD$1.15 for every MWh produced when meeting power demand. Storing the surplus electricity from wind and solar during off-peak periods by producing hydrogen through electrolysis process and storing it within the natural gas pipeline network saved 10% of the cost of electricity that generated to meet the power demand.