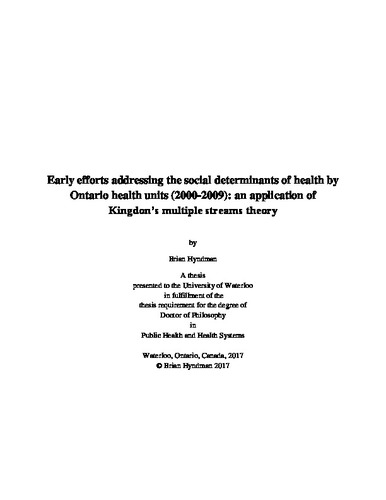 Actions to reduce health inequities by addressing external contributory factors, which are commonly referred to as the social determinants of health (SDH), have emerged as a recommended focus of public health practice. While facilitators and barriers to SDH-focused public health practice have been assessed at the national level, comparatively little research has examined the factors affecting the initiation of SDH-focused initiatives by local public health authorities. This study addresses this knowledge gap through a multiple case analysis of five Ontario health units that launched SDH-focused initiatives during a timeframe characterized by the absence of an explicit provincial mandate for this work. Collectively, these organizations also advocated for the inclusion of SDH-focused actions into the legally mandated functions of Ontario health units. Twenty in- depth, semi-structured interviews were conducted with the current and former leadership of these health units, health unit staff and community allies. Interview data were supplemented by primary documentation. Data collection and analysis were guided by multiple streams theory, a policy agenda setting model maintaining that policies arise through the efforts of policy entrepreneurs capitalizing on ‘windows’ for policy change created by the convergence or two or more independent streams: problem, politics and policy. The data demonstrated moderate to strong support for the theory as a predictor of the conditions enabling the initiation of SDH-focused activities, with evidence of a full or partial stream convergence in the majority of cases (5-6), depending on how one defines the parameters of the policy stream. The independence of the streams was upheld at the local level. However, the collaboration for a province-wide SDH standard was characterized by the inter-dependence of the politics and policy streams. The integration of open coding with theory-based coding in the data analysis enabled the identification of key explanatory variables not accounted for by multiple streams theory. These included geography, historical antecedents, and community culture. Elements of two alternative policy theories, the advocacy coalition framework and the punctuated equilibrium framework, also displayed predictive utility. Implications for the study of theory, practice and methods are discussed, as are strengths and limitations, and priorities for future research.