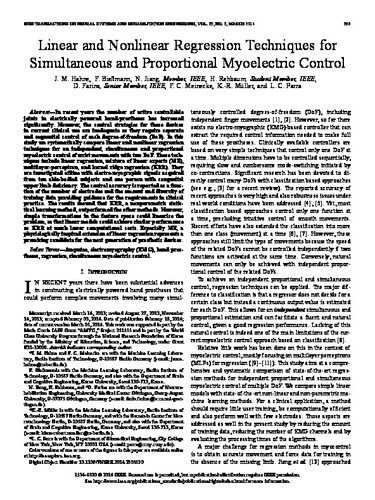 In recent years the number of active controllable joints in electrically powered hand-prostheses has increased significantly. However, the control strategies for these devices in current clinical use are inadequate as they require separate and sequential control of each degree-of-freedom (DoF). In this study we systematically compare linear and nonlinear regression techniques for an independent, simultaneous and proportional myoelectric control of wrist movements with two DoF. These techniques include linear regression, mixture of linear experts (ME), multilayer-perceptron, and kernel ridge regression (KRR). They are investigated offline with electro-myographic signals acquired from ten able-bodied subjects and one person with congenital upper limb deficiency. The control accuracy is reported as a function of the number of electrodes and the amount and diversity of training data providing guidance for the requirements in clinical practice. The results showed that KRR, a nonparametric statistical learning method, outperformed the other methods. However, simple transformations in the feature space could linearize the problem, so that linear models could achieve similar performance as KRR at much lower computational costs. Especially ME, a physiologically inspired extension of linear regression represents a promising candidate for the next generation of prosthetic devices.