Removal of N,N-dimethylacetamide from water by adsorption 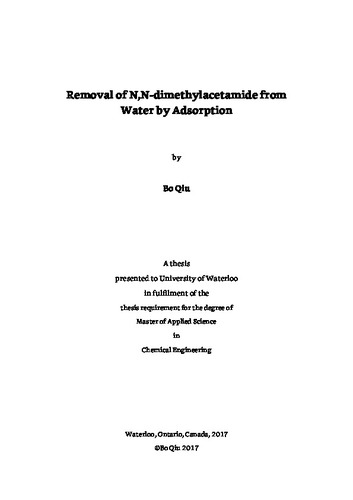 Apologies for re-submitting this. I accidentally deleted the original submission. (3.297Mb)

Discharge of untreated industrial effluents containing N,N-dimethylacetamide (DMAc) is hazardous to the environment. This study explores the separation of DMAc from wastewater using adsorption on activated carbons. In total, three types of activated carbons were investigated. The adsorption characteristics of activated carbons for the removal of DMAc from aqueous solutions were investigated through a batch sorption study. The effects of DMAc concentration in the feed, contact time and temperature on the adsorption performance were investigated. The adsorption equilibrium was described by the Langmuir isotherm. A thermodynamic evaluation of the process showed that the DMAc adsorption on activated carbon was a spontaneous exothermic process. For the kinetic data analysis, pseudo-second-order equation was modified since the term Q_e in the kinetic equation should be the equilibrium uptake corresponding to the instantaneous DMAc concentration in the solution. In order to evaluate the rate constant k_2, sorption kinetic data was fitted with the modified pseudo-second-order equation. The calculated values of rate constant k_2, for the adsorption of DMAc on all three types of carbons, were used to the modified pseudo-second-order model to predict the kinetic data. A good comparison was observed between the experimental data and model calculations. The kinetic data was also fitted with the pseudo-first-order model and the intraparticle diffusion model which both did not show clear conformity. There were at least five adsorption-desorption cycles, using ethanol with heating and vacuum. The uptake capacity of DMAc and adsorption/desorption kinetics remained almost the same during and after the five cycles. The rate constants were also calculated by fitting the kinetic data with the modified pseudo-second-order model. The dynamic adsorption was studied in a packed bed column packed (using two types of activated carbon, while the third type was not viable for column operation). Experiments were performed to study the effect of the influent flow rate (0.5, 1.0 and 1.5ml/min) and regeneration of carbon bed (up to five cycles). Whereas the bed height, column diameter and amount of adsorbent packed were kept constant during this study. Carbons in the column saturated with DMAc were taken out and regenerated effectively by extracting with ethanol and the by heating and vacuum. After three consecutive cycles of adsorption and desorption, no change in the uptake capacity was observed. The bed depth service time model, the Thomas model and the Yoon-Nelson model were used to analyse the breakthrough data. The calculated values of Yoon-Nelson constants were used to predict the breakthrough curves. A good comparison was observed between experimental data and the Yoon-Nelson model calculations. An investigation was conducted to check if the novel hollow fibre contactors could fully utilise the potential of the third type of activated carbon on adsorption of DMAc. Four types of hollow fibre contactors were made, each had some variations or modifications to the former one. Experiments were performed to study the effect of the influent flow rate (0.5 and 1.0 ml/min) while the bed height, the column diameter and the weight of activated carbon packed were kept constant during this study. The fourth design (the last type) of the contactors had three configurations regarding the geometric arrangement of the hollow fibres. Through these different types of modules, a clear direction for further design of the hollow fibre contactors was developed.