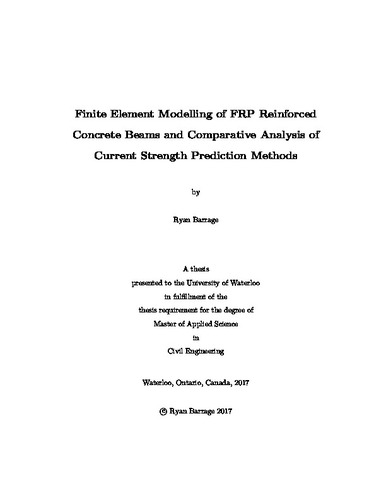 The modelling of glass fibre reinforced polymer (GFRP) reinforced, concrete beams was conducted by the author in the finite element analysis software ABAQUS. The study extended upon the work done by Joseph Stoner (2015) to calibrate the Concrete Damaged Plasticity (CDP) model, with the intent to ultimately complement laboratory testing in a research setting. Furthermore, current strength prediction methods for beams reinforced with fibre reinforced polymer (FRP) were evaluated against a database of tested beams collected from literature. The validity of the proposed ABAQUS models was assessed against selected beams from the database. Finally, a parametric study was conducted on 12 GFRP reinforced beams, over 12 slenderness ratios, to study the effects of slenderness. The database of tested beams consisted of beams that failed in shear, as tests on slender beams reinforced with FRP are scarce. The strength prediction models were therefore evaluated on their ability to predict shear capacity. The models included in the analysis are the CSA S806-12, the ACI440.1R-15, the Japan Society of Civil Engineers (JSCE), and the Intelligent Sensing for Innovative Structures (ISIS) Canada Manual No. 3 shear models, as well as a prediction model proposed by Nehdi et al. (2007). The study concluded that Nehdi model most accurately predicts the shear capacity for beams with transverse reinforcement, with the remainder of the models providing very conservative values. For beams without shear reinforcement, all models provided good estimates for the shear capacity, with the CSA S806-12 model matching most closely to experimental data. The ABAQUS models proposed by Stoner were evaluated against a series of 8 beams taken from literature: two beams without shear reinforcement, and six with shear reinforcement. The results validated the recommendations made by Stoner, and verified the use of 30° dilation concrete to model beams without stirrups, and 50° dilation concrete to model beams with stirrups. Further research was deemed necessary to accurately model beams that exhibited both flexural crushing and stirrup rupture. The results of the parametric study suggested that the beams without shear reinforcement required large shear span to depth ratios to fail in flexure, exceeding ratios of 15. The beams with shear reinforcement failed in flexure at slenderness ratios approaching 10, demonstrating the increased shear strength provided by the stirrups. The increase in slenderness ratio required to fail in flexure (compared to steel reinforced beams) is attributed to the larger tensile strength of GFRP bars. Furthermore, an investigation into the shear capacity prediction methods of CSA S806-12 yielded that the model under-predicts the stirrup contribution to shear capacity. Further investigation determined the most likely cause was the modelling of the confinement induced by the stirrups.