The Control of Fe and pH on the Photodegradation and Characterization of Dissolved Organic Matter in Small, Oligotrophic Canadian Shield Freshwaters 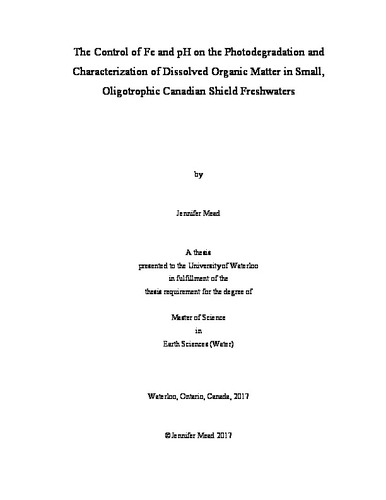 Carbon is an essential building block for life and is involved in many biotic and abiotic processes. Thus it is imperative to have a comprehensive understanding of carbon cycling. Recent research has established that inland lakes are important contributors to the regional carbon cycle because they store, process and emit large masses of carbon over relatively short timescales (ie. days to years). Lakes receive 1.9 Pg C y-1 of terrestrially-derived carbon but only export approximately half of that to oceans while the remainder is either transferred to the sediment as particulate organic carbon (POC) or evaded to the atmosphere as carbon dioxide (CO2; Molot and Dillon, 1996; Cole et al. 2007). Increased atmospheric CO2 has caused global environmental problems including ocean acidification, temperature increases leading to melting glacial ice and sea level rise, and changes in precipitation patterns including extreme weather resulting in flooding and droughts. Investigating the mechanisms that affect these processes is important for understanding the global carbon cycle and predicting future changes to the lake systems under the stress of climate change. As the largest input of terrestrial carbon to lakes, dissolved organic carbon (DOC) (composed of a complex mixture of thousands of different organic molecules less than 0.1-0.7μm) is important to lake ecosystem function. Large quantities of DOC are converted into other forms of carbon within lakes and some of the transport mechanisms between sources and sinks do not add up. Photodegradation of DOC is an important abiotic process for DOC loss. Products of DOC photodegradation including POC, dissolved organic carbon (DIC; can evade to the atmosphere as CO2), and photolytically altered DOC affect the size of carbon pools in lakes. Concomitantly, pH and Fe can influence the rates of carbon transformation, yet these influences are poorly understood. The goal of my research was to explain an important gap in our understanding of why some carbon goes to the atmosphere as CO2 and some goes into the lake sediments as POC. This has implications for contaminant transport, lakes recovering from acidification, increasing lake water temperatures, and climate change modeling. In laboratory experiments, pH and Fe of three boreal streams (two from the Experimental Lakes Area, Kenora, ON and one near Dorset, ON) were manipulated to observe the impact on DOC photodegradation and POC formation. Measurement of carbon pools during the photolysis experiment allowed for the determination of DOC loss (production of DIC and POC formation) and carbon and isotopic mass balances. A novel size exclusion chromatography method, liquid chromatography organic carbon detection (LC-OCD), was used with other measures of quality to identify changes in DOC composition resulting from photodegradation. While photodegradation was an important process that transformed stream organic carbon (rates decreased at pH 6.5 and increased with increased Fe concentrations), no significant POC was generated from this process. Thus it is still unknown as to how large portions of DOC in oligotrophic boreal freshwater lakes ends up in the sediments as POC. Experiments were also conducted to study the influence of pH, Fe(II) and Fe(III) on measures of DOC quality (specifically absorbance and LC-OCD). This work has demonstrated that certain measures of DOC quality are influenced by pH, Fe(II) and Fe(III) and thus, these parameters must be considered when making conclusions about DOC quality when using such measures.

Jennifer Mead (2017). The Control of Fe and pH on the Photodegradation and Characterization of Dissolved Organic Matter in Small, Oligotrophic Canadian Shield Freshwaters. UWSpace. http://hdl.handle.net/10012/11942