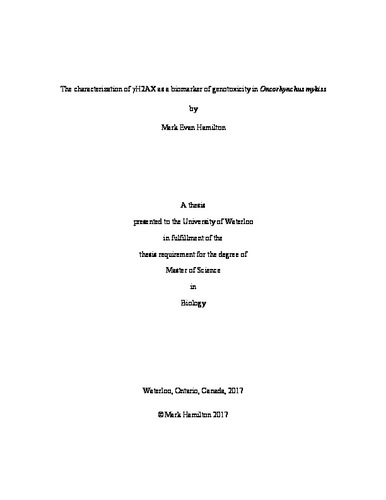 Environmental contamination due to by-products and waste from industrial activities is a growing universal concern, especially regarding the impact on water and the aquaculture industry. Conventional tests to diagnose genotoxicity in fish include the comet assay and the quantification of micronuclei; however, these techniques are uninformative as to the nature of DNA damage occurring and the resulting gene response of the organism. This study involves characterizing the sensitivity of H2AX phosphorylation (γH2AX), a marker of double-stranded breaks, in rainbow trout using western blotting. I present RTbrain-W1 as an excellent fish cell line for characterizing γH2AX in response to the model DNA damaging agents, bleomycin, MMS, and 4-NQO. Bleomycin, which was not cytotoxic to RTbrain-W1, induced robust H2AX phosphorylation at 12.5 μg/mL that decreased with increasing concentrations up to 100 μg/mL after a 24h exposure. At 100 μg/mL, γH2AX levels were rapidly and strongly increased by 4h. Cells exposed to MMS and 4-NQO exhibited a contrasting dose response to bleomycin; increasing MMS and 4-NQO doses were cytotoxic and increased H2AX phosphorylation dose-dependently. In MMS-treated cells, γH2AX was first detectable at 0.01%, and an increase was observed in 0.015%-treated cells that remained stable through to a 0.025% treatment. Detectable induction with MMS at a concentration of 0.015% was much slower and weaker than bleomycin, and was first observed at 12h, increasing through 24h. Confocal microscopy was used to examine γH2AX localization throughout these concentrations of bleomycin and MMS, and dose responses following treatment after 24h. MMS-treated cells showed a dose dependent increase in γH2AX that was observed in the cytosol, likely due to cell death. Bleomycin-treated cells showed a strong dose-dependent increase of nuclear γH2AX localization that stabilized, and slightly decreased from 50 μg/mL to 400 μg/mL. Cells treated with 4-NQO showed a very subtle dose-dependent increase in γH2AX levels at 1000 nM, which was confirmed by densitometry to be a 2x increase. These results show the sensitivity of H2AX phosphorylation in response to different genotoxicants, and suggest that γH2AX may be a valuable biomarker for genotoxicity assays using rainbow trout cell lines.

Mark Evan Hamilton (2017). The characterization of γH2AX as a biomarker of genotoxicity in Oncorhynchus mykiss. UWSpace. http://hdl.handle.net/10012/11941