Neospirituality, Social Change and the Culture of the Post-Fordist Workplace 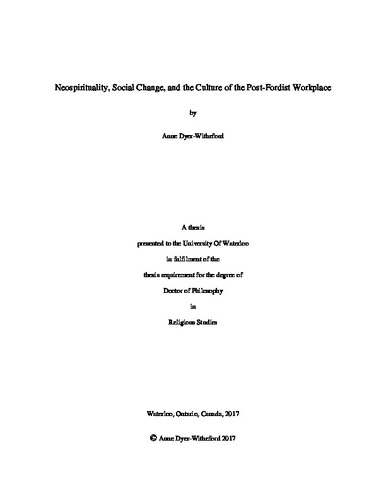 This dissertation applies a religious studies perspective to the topic of neospirituality in the iconic post-Fordist workplaces of symbolic analysts. Despite a voluminous business literature on the importance of spirituality, this topic is underexplored by scholars of religion. Using secondary sources, I address this neglect by relating the themes of religious modernization and the changing structures of capitalism to this phenomenon. This dissertation outlines the important similarities between the basic beliefs and practices of the neospirituals and the culture, skill-set and worldview of symbolic analysts, dictated by work`s team and networking forms. Like Weber––but for a different class and economy––I analyzed a social stratum that acts as a carrier of a “practical ethic” reflective of a specific religious orientation. To understand this process, I explored neospiritual holism, the corporation as a psytopia, and the dematerialization and second privatization of religion. In relation to post-Fordism, I explored macroeconomic changes, labour-force recomposition, workplace restructuring since the 1970s and the culture of work. Anecdotal evidence and research suggest that neospirituality helps symbolic analysts reconcile themselves to the particular demands and concomitant lifestyle pressures of their creative labour. Five ways are proposed: Neospirituality`s holism supports the transition of early interest in genuine worker empowerment into a neoliberal anti-government sentiment that unites workers and their managers; neospirituality imaginatively collapses the modernist self/other distinction into a unitary world, helping assimilate individual-corporate interests; expensive neospiritual well-being commodities insulate from community relations and direct personal service use, maintaining while denying symbolic analysts superior social status; neospiritual prosumption posits the factory of the self––applied to work, self-production makes workers “owners;” and neospiritual preference for energy over matter mirrors post-Fordism’s privileging of immaterial over material products and its streamlining of all value to commodity value.