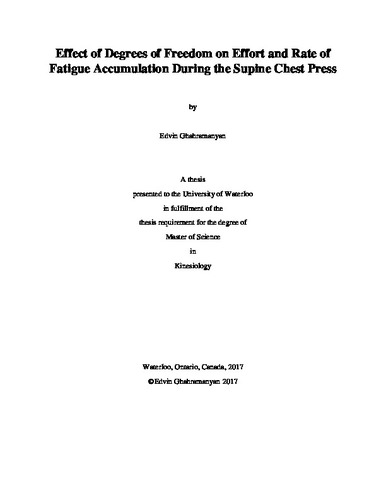 INTRODUCTION For workplace tool design and exercise equipment design alike, the number of the degrees of freedom to be controlled in a tool or machine has been shown to affect the biological response of the user. Studies show more muscle activation when either the load, or the supporting surface is less stable (i.e. has more degrees of freedom). Despite this, there has been little research on the effect of added degrees of freedom on neuromuscular fatigue, although it may be an intervening variable of interest as fatigue has been shown to increase the incidence of labour accidents leading to injuries at the workplace due to diminished motor control, increased force variability and reduced maximal strength. The purpose of this study is twofold. Firstly, it is to analyze the effect which the demand of controlling additional degrees of freedom has on effort and rate of fatigue accumulation in a strength trained population. Secondly, it is to observe how activation of non prime mover muscles changes with fatigue with different stability requirements, and how prime mover muscle activation changes in response. METHODS In this study, the supine chest press exercise was utilized to demonstrate the effect of allowing more degrees of freedom at the hands, on effort and fatigue. A Smith machine was modified to allow uncoupled side-side and coupled back-forward degrees of freedom. Six bench press “modes” were tested, each with varying number of degrees of freedom; four Smith machine bench press modes, barbell bench press and dumbbell bench press. 19 strength trained participants were recruited. 1RM barbell bench press was tested and each participant performed 50%1RM bench press to fatigue on every bench press mode over two sessions. Mean EMG and mean power frequency from every repetition, mean hand and elbow action tremor, load path deviation, mean thoraco-humeral angle were collected. A mixed effect linear model was used to obtain initial values and rate of change with fatigue. Initial value differences were used to compare effort between modes and rate of change between modes was used to compare rate of fatigue accumulation between modes. Initial and final rate of perceived difficulty were collected and analyzed using a repeated measures ANOVA. RESULTS There was a significant main effect on all prime mover muscles’ activity for condition (p<0.01). Overall, there was greater overall initial muscle activity in modes with more unrestrained degrees of freedom. Most notably, there was a redistribution of muscle stress from elbow extensors to shoulder (horizontal) flexors during modes which had uncoupled side-side degree of freedom unrestrained. For instance, during the Smith machine mode with all degrees of freedom unlocked, there was a 17% increase in pectoralis major activity and a 5% decrease in triceps’ activity. This muscle redistribution, which corresponded with the mechanical nature of the task was correlated with perceived difficulty of control. There was a significant main effect on the number of repetitions completed to failure (p<0.01). Only modes which had uncoupled side-side degree of freedom unlocked had a significant effect on fatigue. These modes produced, on average, 5 less repetitions. Out of initial non-prime mover muscle activation, only biceps showed a general trend towards increasing with more unrestricted degrees of freedom, while shoulder musculature was unchanged in the absence of fatigue. However, with fatigue accumulation, modes which had more degrees of freedom unrestricted generally had greater rate of non-prime mover musculature activation increase, which was also correlated with prime mover muscle activation and prime mover mean power frequency decrease. Additionally, the results showed a trend towards individuals with more strength training experience being able to perform better with the more unstable dumbbell and barbell bench press as compared to less strength trained individuals. CONCLUSION Although each degree of freedom altered did not have the same effect, general findings included: as the unrestrained degrees of freedom increased, effort required increased and participants fatigued more rapidly. The findings give insights into the effects of people exerting forces against unstable loads in strength training and occupational settings.

Edvin Ghahramanyan (2017). Effect of Degrees of Freedom on Effort and Rate of Fatigue Accumulation During the Supine Chest Press. UWSpace. http://hdl.handle.net/10012/11935