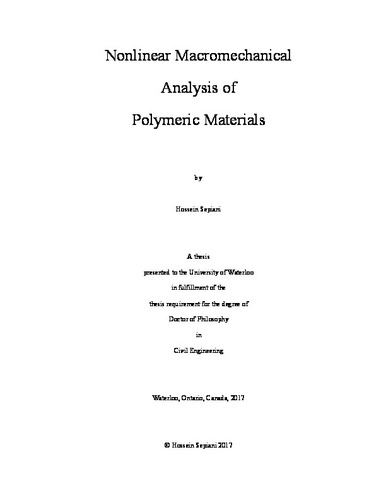 A new methodology for predicting the short term and long term responses of viscoelastic and viscoplastic materials is developed in this research. The methodology aims to predict the behaviour of viscoelastic/viscoplastic isotropic material subjected to loading in isochronous condition (temperature effects are not included). The methodology is implemented in a finite element (FE) procedure through a user defined material subroutine (UMAT) which is linked to ABAQUS software and is called at each increment and material calculation point. The built-in viscoelastic ABAQUS procedure is not able to analyze the nonlinear behaviour of viscoelastic and viscoplastic materials, hence, a specific procedure needs to be defined, which justifies the application of user generated subroutines for material definition in this work. The development of the methodology consists of four major parts: 1) development of material models for Nonlinear Viscoelastic (NVE) and Nonlinear Viscoplastic (NVP) materials; 2) development of macromechanical NVE and NVP models; 3) development of failure model; 4) implementation in finite element procedure. For the first part, a new approach is developed for macromechanical constitutive formulations for time-dependent materials. In particular, two phenomenological constitutive models for polymer materials are illustrated, describing time-dependent and nonlinear mechanical behaviour, the Nonlinear Viscoelastic (NVE) and Nonlinear Viscoplastic (NVP) material models. In the proposed approach, short term creep test data are used for modelling both short term and long term responses. A major part of the experiments were done by Liu (Liu, 2007), while the rest have been provided by ExxonMobil, a division of Imperial Oil. The differential form of the model is used to simulate typical Nonlinear Viscoelastic polymeric behaviour using a combination of springs and dashpots. Unified plasticity theory is then used to develop the second model, the Nonlinear Viscoplastic one. Least squares fitting is applied for the determination of material parameters for both models based on experimental results. Due to practical constraints, experimental data are usually available for short term time-frames only. In the presented proposed formulation, the material parameters determined from short term testing are used to obtain material parameter relationships for predicting the long term material response. This is done by extending short term information for longer time frames. The second part, which is the development of macromechanical NVE and NVP models, is done using two theories: multiple integral and single integral representations of constitutive equations. Multiple integral representation for three-dimensional behaviour is an extension of linear superposition to the nonlinear range. The method is based on the small strain assumption, but is extended to large deformation for materials in which the stress-strain relation is nonlinear and the concept of incompressibility is governing. Similar to the material modelling (first part), the modelling process uses springs and dash-pots, and a power-law approximation function method for viscoelastic and viscoplastic nonlinear behaviour, respectively. Single integral representation, on the other hand, is a simplified form of multiple integral representation. Based on Schapery's single integral constitutive law, a solution procedure has been provided to solve nonlinear viscoelastic behaviour. This procedure is applicable to three dimensional problems and uses time- and stress-dependent material properties to characterize the nonlinear behaviour of the material. The approximation equations describing material behaviour are defined based on the material response in a short test time frame. For this estimation, Prony series method is used the basis of the constitutive relations is the non-separable form of the equations. For the failure modelling (third part), an energy based method of delayed failure is presented. The delayed failure approach is applicable to both NVE and NVP modelling for both multiple integral and single integral theories. The approach works with limiting the strain energy of the material to a boundary which is the resilience limit. Here, based on Schapery's single integral constitutive law, the delayed failure criterion is employed for NVE modelling, which helps to solve for the polymer’s time to failure involving material nonlinearity. In the last part, the proposed viscoelastic and viscoplastic models, as well as the delayed failure criterion, are implemented in a user material algorithm of the FE general purpose program ABAQUS and the validity of the models is assessed by comparisons with experimental observations from tests on polyethylene material samples in one-dimensional tensile loading (these tests are done by others). The experiments are short term loading, long term loading, and step loading. Comparisons show that the proposed constitutive model can satisfactorily represent the time-dependent mechanical behaviour of polymers even for long term predictions and the developed formulation provides a flexible and reliable framework for predicting load responses of polymers. It is also concluded that with proper material properties to reflect the deformation involved in the mechanical tests, the deformation behaviour observed experimentally can be accurately predicted using the Finite Element Method (FEM) simulation.