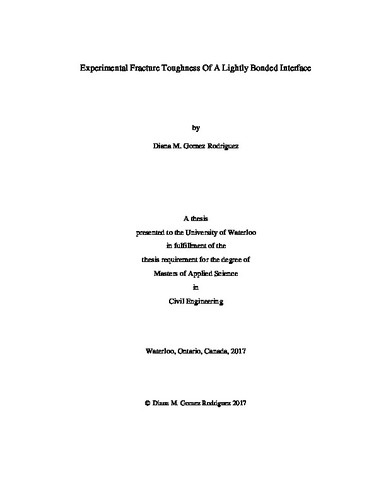 The geomechanical behaviour of natural fractured media (NFM) is governed by existing planes of weakness. These planes of weakness can be open fractures, partially closed joints, or cemented veins, and they are classified in groups, joint sets, based on the similarities among them. Some joint sets exhibit cohesion due to infill material emplaced along the walls of the fractures. The geometry of the joint sets in combination with the rigidity of the intact rock allows for shear events to occur when the rock mass is stimulated by hydraulic fracturing. A methodology is produced to create an analogue cohesive fracture within a transparent rock analogue, polymethylmethacrylate (PMMA), and an experimental technique to measure the cohesion or fracture toughness is developed in this study. The methodology is produced to create the cohesive interface is applied by creating cohesive cube specimens to study the interaction the interaction between the hydraulic fracture and the fracture media. The cohesive interface was achieved using the thermal bonding properties of PMMA where two blocks of the material were fused together at 149˚C (300˚F) under different applied stresses – 6, 12, and 24kPa - and different time intervals – 6, 12, 24, and 48 hours. The specimens were rectangular plates with a circular hole at their center and along the interface. This hole serves as fracture initiation point when subjected to uniaxial load perpendicular to the interface during the fracture toughness test. This test created a controlled fracture where the fracture length increases proportionally to the load increment. Measurements for the fracture length were taken at different load input levels. This information, along with the specimen geometry, and the load and displacement record, served to calculate the fracture toughness of each specimen using Griffith’s principles. The ultimate load approach and the mid-point approach were used to analyze the results from this test. The ultimate load approach provided lower coefficient of variability in the scenarios of thick 25mm specimens than for the thin ones; while the mid-point approach provided lower coefficient of variability for the thin 12mm specimens than the ultimate load approach. This is because the mid-point approach truncates the results to minimize the buckling effect. The thick time variable specimens resulted in low coefficient of variability using both approaches. The time variable testing was stopped at a maximum load close to that corresponding to the midpoint approach. Validation of the compressive test was completed by using the standard Compact Tension (CT) procedure where one of the time variable scenarios was tested. This served to prove that the methodology for creating the annealed surface is reliable and it delivers a weakly bonded interface. Nevertheless, more CT testing is recommended to form a relationship between the uniaxial compression test and the standard CT methodology. Furthermore, an experimental procedure is explained for the hydraulic fracturing emulation using a cohesive cube within a costume made set up.