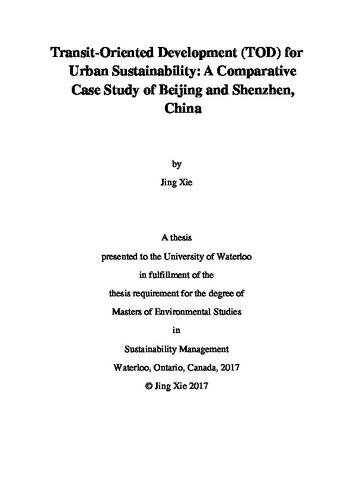 A number of urban problems pose ongoing challenges to sustainable development, which includes urban sprawl, low rates of land utilization and increases in private vehicular ownership and related traffic congestion. Transit-oriented development (TOD) has been touted as one strategy to address these urban development challenges. Although TOD strategies have a relatively mature theory and practical system in the world, the development situation in China is still at a stage of trial and error. Moreover, many studies have been conducted to tackle the issues related to land use, transportation planning, and the feasibility of TOD, while few have investigated the implementation effects of TOD on a sustainable urban future. Therefore, this thesis reviews the basic concept of sustainable urban development and pioneering paradigms about TOD practices, then applies a Pressure-States-Response (PSR) evaluation framework to compare the implementation effects of TOD in two typical Chinese metropolises —Beijing and Shenzhen. Quantitative data collected from National Statistics are visualized using descriptive statistics to conduct the comparative analysis. This study defines a sustainable city as one that achieves a balance between the three sustainability pillars of: economy, environment, and society. Within this definition of sustainability, the comparative implementation effects are assessed for the TOD, performance of Beijing and Shenzhen from the year 2010 to the year 2014. The research found that both Beijing and Shenzhen had faced an increasing pressure from population density, expenditure on housing and transportation, and the number of civil automobiles during the five years. Shenzhen performed better than Beijing on the indicators of “disposable income of urban residents per capita”, “construction land per capita”, “area of roads per capita” and “GDP per acre”; while Beijing showed more positive effects than Shenzhen on the indicators of “urban residential gross floor area per capita” , “passengers traffic”, and “number of public vehicles”. For the economy response indicators, the Beijing government produced a more effective effect on “fixed assets per acre”, and “fixed investments in real estate industry”, while the Shenzhen government had a stronger performance on “fixed investments in transportation industry”. The key findings from this research support the building of muilti-mode transportation systems to enhance ecological, economic and social sustainability in rapidly growing cities. The research contributes to the body of knowledge of the performance of metropolises towards urban sustainability by evaluating the implementation effects of TOD and demonstrating that government planning and development policy does impact TOD outcomes. Besides, this study makes a practical contribution to discussions on China’s urban planning and TOD supportive policies and decisions that urban planners and policy makers face as they work towards achieving more sustainable urban development.