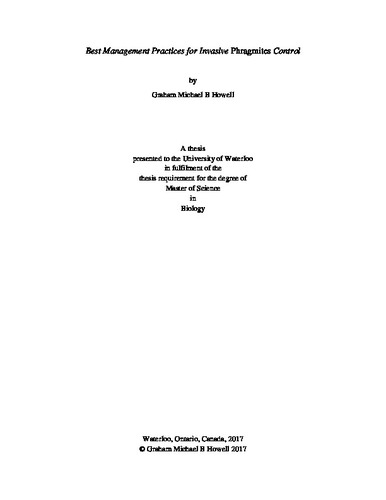 The invasion of European Phragmites australis in North America has altered resident species plant assemblages in wetlands and created large monotypic patches. As a response, North American land managers control this invasive species through a combination of herbicide (often glyphosate-based) and mechanical treatments. The impact of glyphosate herbicides and the density of P. australis patches on wetland seedbanks remains unclear, and the mechanical removal of P. australis biomass requires appropriate disposal to avoid further spreading the invasion. I tested the effect of the glyphosate herbicide WeatherMAX® and examined the effect of P. australis stem density on the number and richness of germinating seeds in wetland seedbanks. I also examined the utility of burial as a simple disposal method for P. australis biomass during excavation projects. I found that neither the use of glyphosate herbicide nor the density of P. australis stems significantly affected the number or richness of germinated seeds. Additionally, I observed that the application of herbicide prior to P. australis seed set can reduce the number of viable P. australis seeds added to the local seedbank. After testing the burial method with a mesocosm study, no regrowth of P. australis was observed in units buried 0.7 m or more. My results indicate that a viable seedbank survives herbicide application and high density P. australis invasions. Although my study suggests that 0.7 m is a sufficient burial depth, I recommend 1 m be the minimum burial depth in practice to provide a margin of safety that reflects the invasive potential of P. australis. My research contributes to the body of work related to the control and disposal of P. australis, and the restoration of areas that P. australis has invaded.