A Comprehensive Sensitivity Analysis of the Weather Research and Forecasting Modeling System over Southern Ontario, Canada 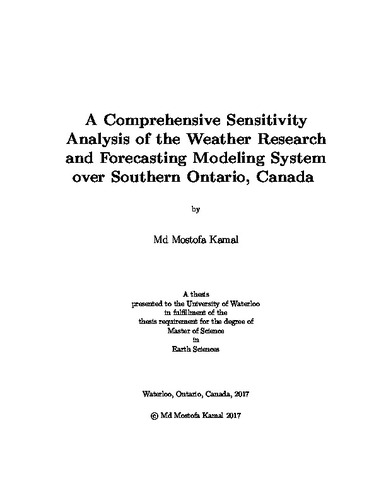 Every year weather events cause billions of dollars property damage and take many lives globally. Preventing as much damage as possible is crucial, and one way to help is through having the most accurate advance warning of extreme weather events. Therefore, this thesis investigates the sensitivity of precipitation, temperatures, and surface energy fluxes (i.e., sensible heat flux (SHF), latent heat flux (LHF), and ground heat flux (GHF) in four cumulus cloud (CU), five cloud microphysics (MP), and four planetary boundary layer (PBL) parameterization schemes; over five years (2002, 2007, 2008, 2014, and 2015) with significantly different climatological atmospheric conditions; horizontal grid spacing; two seasons: winter and summer; and feedback between the nest and its parent domain, using the dynamical downscaling technique of the Weather Research and Forecasting (WRF) model. The main objectives are 1) to identify a combination of physics schemes that realistically reproduce observed atmospheric conditions, and 2) to improve current understanding of factors influencing the micro climate of southern Ontario, a region of complex land-water-atmosphere interactions. Ontario is also the most populous province and the largest manufacturing hub of Canada. WRF-simulated precipitation and temperature agree well with DAYMET model gridded observations, with correlation coefficients of nearly 0.3 to 0.8 and ˃0.9, respectively. Precipitation showed an average systematic bias for July of -50 to +30 mm and for January of -10 to +30 mm. The simulated precipitation was more sensitive to CU and PBL schemes. WRF-simulated temperatures showed good reproducing skill, with biases within the range of -1.0°C to +1.0° C in most parts of the domain. Model-predicted temperature was quite sensitive to PBL and MP schemes. Model-simulated precipitation variability increased when the horizontal grid resolution was refined from 8.0 to 2.67 km. However, simulated temperature variability decreased. Overall, the model performed better in the 2.67 km resolution simulation than in the highest resolution simulations (with grid spacing of 0.888 km), an unexpected finding that suggests the need for carefully designed high-resolution dynamical downscaling experiments. WRF's limitation to capture all variation that may occur at a resolution of 1 km, particularly of precipitation in mountainous areas may result from uncertainties in our understanding of the climate and our inability to parameterize sub-grid scale processes realistically. WRF reproduced the diurnal variability of the SHF very well but systematically overestimated LHF compared to eddy covariance (EC) tower measurements for June of 2007 and 2008. For the interior of all three domains in July 2002, spatial distribution was overestimated for SHF and underestimated for LHF, with biases ranging from -30 to +30 W/m² over most of the area when compared to the North America Land Data Assimilation System (NLDAS) model gridded analysis. WRF showed little sensitivity to the choice of PBL scheme, except for January 2002's LHF, the hottest January of the five studied. If forced with distinctively different annual climatological boundary conditions, such as extreme cold in January 2014 and below average temperatures in January 2015, the model's simulated spatial distribution of energy flux bias indicates behavior that clearly differs from NLDAS analysis. A large energy flux bias occurs over the smaller shallow northern lakes, perhaps due to incorrect representation of their water temperatures. Overall, the Kain-Fritsch (KF) CU, Yonsei University (YSU) PBL, and WRF Single-Moment 6-class (WSM6) microphysics parameterization schemes exhibit superior results over the domain studied. The WRF model shows a high skill score over southern Ontario while reproducing observed climate means and statistics. Nevertheless, the model's performance depends on the meteorological variables, season, and synoptic conditions. The Great Lakes strongly influence atmospheric conditions in southern Ontario, by affecting precipitation and surface temperatures, ranging from the diurnal to the seasonal timescales. These results affirm the need for extensive sensitivity analysis, for both research, and operational applications. However, the findings are limited by the shorter spin-up time and by having only one-month simulation, although WRF ran for a month in both the winter and summer over multiple years.