An Exploration of Sherpas’ Narratives of Living and Dying in Mountaineering 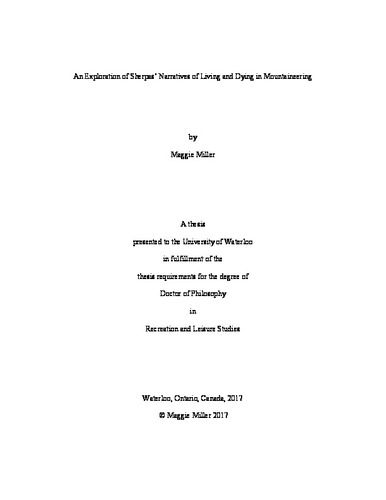 Mountaineering is the cornerstone of Nepal’s $370-million-a-year adventure tourism industry. Each year, Climbing Sherpas lead foreign mountaineers (paying clients) up the Southeast ridge of Mt. Everest as they make their bids for the summit. These Sherpas commit themselves to securing and saving the lives of their clients by doing much of the dangerous labour, often jeopardising their own lives in the process (Davis, 2014; National Public Radio [NPR], 2013; Peedom, 2015). Social justice concerns arise as tensions grow between the international demand to climb and the risks and fatalities associated with summit attempts. Mountaineering is an extreme sport, historically reserved for highly skilled climbers. However, it is becoming increasingly blurred with our understandings of adventure tourism as a recreational activity open to anyone with the financial means to participate. Consequently, the industry is critiqued for the ways in which people with “means,” regardless of experience, pursue mountains like Mt. Everest (Davis, 2014; Payne & Shrestha, 2014). Moreover, within current mountaineering, tourism, and leisure discourses perspectives from Sherpas have been limited. Stemming from critiques of Nepal’s growing adventure tourism industry, and recognising the centrality of Sherpas’ roles within it, this research considers Climbing Sherpas’ stories of living and dying in mountaineering within the Solukhumbu (commonly known as the Mt. Everest Region) of Nepal. This critical narrative inquiry has been shaped by philosophical and theoretical positions underpinned by existentialism, as well as Foucault’s notions of power. Inspired by visual methodologies, this research draws upon fieldwork observations and thirteen audio and visually recorded interviews conducted in Nepal in the spring of 2015. Analysis of narrative findings reveal an interplay of death, pride, responsibility, and power in experiences of freedom on the mountainside. Sherpas’ participation in mountaineering expeditions is reflective of socioeconomic pressures faced off the mountain, but is also increasingly related to the perceived “name” and fame that comes with successful mountain summits. Additionally, Sherpas’ stories of death provide a space to critique tourism development. Sherpas affected by disasters, death, and the like find themselves “betwixt and between” their life prior to the event and an uncertain sense of the future (Turner, 1960, p. 95). Liminality, an anthropological concept introduced by Arnold van Gennep (1960), becomes transformative as Sherpas and their communities use these moments of uncertainty to take stock of the purpose of their lives, often considering new trajectories. Accordingly, as Sherpas navigate their own experiences of death, power relations shift and they demonstrate individual freedom and collective agency through their responses to the pressures and demands of Nepal’s commercial mountaineering industry. Rather than being seen as static and always vulnerable, Sherpas harness inherent systems and power, which at times is vital to sustaining their lives. The Sherpas’ stories presented in this work challenge assumptions of immobile host populations that underlie some of our current understandings in tourism and recreation disciplines, further disrupting oppositional binaries of East/West and us/them. Additionally, exploring death as it relates to power on the mountainside draws attention to critical concerns regarding tourism (and its associated industries) as a mechanism for economic development. As the research findings highlight, access to the means (both personal and societal) for development indeed help to shape one’s power to choose to engage in risky industries and activities. Finally, this research illuminates the ways audio-visual technologies may be utilised to provide opportunities for Sherpas to represent themselves, their cultures, and experiences within academic, as well as media, canons. As the Climbing Sherpas have a vital role to play with regard to the sustainable development of Nepal’s mountaineering and adventure industries, the inclusion of their voices remains integral. Such methodological insights warrant deeper consideration of how we engage the voices of people in marginalised communities in other tourism, recreation, and leisure contexts.

Maggie Miller (2017). An Exploration of Sherpas’ Narratives of Living and Dying in Mountaineering. UWSpace. http://hdl.handle.net/10012/11895