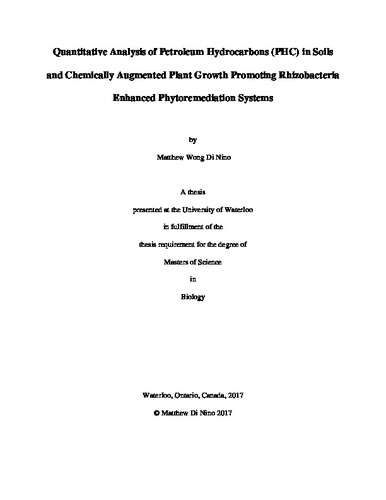 Petroleum hydrocarbons (PHC) are a complex mixture of organic compounds, which can negatively impact terrestrial ecosystems. The Canadian Council of Ministers of the Environment (CCME) provides recommendations on the allowable concentrations of PHC in Canadian soils. The preferred method for PHC analysis according to the CCME is solvent extraction with 1:1 acetone/hexane (1:1 AH) to recover PHC from soils, followed by quantification via gas chromatography with a flame ionization detector (GC-FID). However, the 1:1 AH solvent often co-extracts naturally occurring biological organic compounds (BOC) along with PHCs from soils. This co-extraction of BOC could lead to an incorrect PHC concentration in soil. One potential PHC soil remediation technology is plant growth promoting rhizobacteria (PGPR) enhanced phytoremediation systems (PEPS). PEPS use plants and their associated microbiota to remove PHC from soils. This investigation was divided into two sections. First was optimization of PHC quantification methods. Second was the investigation of the efficacy of chemical augmentation with PEPS (CA-PEPS) with respects to increasing the rate of PHC remediation in soils. The PHC concentrations of these soils were tested using the PHC quantification methods optimized in the first part of this study. Two analytical methods were developed in this investigation, to accurately quantify PHCs in soils while minimizing BOC interference. The first method used the 1:1 acetone/hexane solvent mixture to extract PHC from soils, followed by the addition of activated silica to remove BOC from the PHC-extract (1:1 AH silica cleanup). The second method used the solvent dichloromethane along with the in situ addition of anhydrous sodium sulfate to dry the soils, and activated silica to remove BOC (DCM+SS+Silica). Both 1:1 AH silica cleanup and DCM+SS+Silica extracted similar amounts of PHC (2809.56 mg/kg and 2895.60 mg/kg, respectively; P>0.05) from the weathered PHC-impacted soils, except when soil moisture was higher than 12%. At higher soil moistures the extraction efficiency of the DCM+SS+Silica method decreased by 11.7% (P=0.013) while the 1:1 AH with silica cleanup PHC extraction efficiency was unaffected. PEPS generally remediate PHCs in soils at a slower rate compared to traditional physical cleanup methods (e.g. removal of soils to land fill). In an attempt to increase PHC remediation rates with PEPS, two chemical classes, surfactants and oxygen releasing compounds (ORCs) were investigated. To test this, CA-PEPS greenhouse trials using PGPR-treated seed (Lollium multiflorum, annual rye grass), were performed on weathered PHC-impacted soils. Prior to PEPS application, soils were treated with increasing concentrations of surfactants (petroleum sulfonate oil; PSO) and ORCs (calcium peroxide; CaO2). Increasing PSO concentration (0.00-12.5 µL/g) did not improve (P>0.05) PHC remediation rates, and decreased both L. multiflorum root and shoot dry biomass relative to PEPS. Furthermore, 100 µL/g of PSO treatment completely inhibited L. multiflorum germination resulting in significant decrease in the PHC remediation rate. Conversely, the CaO2 (3.33 mg/g) treatment increased the PHC remediation rate by 11.0% (P=0.038), as well as increasing L. multiflorum root and shoot dry biomass by 22.7% (P=0.016) and 10.6% (P=0.086), respectively, relative to PEPS alone. The rates of PHC remediation in the CA-PEPS experiments were determined by the methods developed in the first part of this study (Chapter 2). The DCM+SS+Silica extracted 7.80% (p=0.038) less PHC from soils then 1:1 AH with silica cleanup. Likely, this was due to the moisture content of the soils, preventing complete PHC extraction with DCM+SS+Silica. When soils were treated with PSO, the removal of PSO from the PHC-extract with activated silica is highly recommended. Otherwise, the GC-FID would overestimate the PHC concentration in the soils, as it cannot distinguish PSO from PHC.