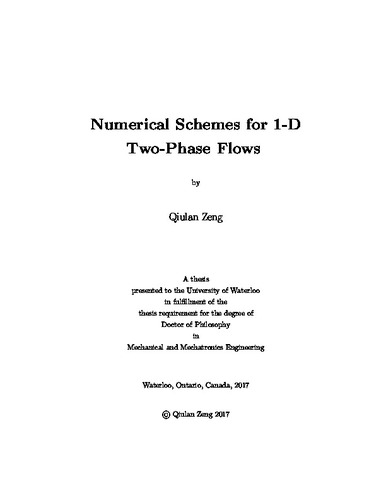 Modeling of two-phase ﬂows with strong thermal and mechanical non-equilibrium ef- fects is important in engineering applications, such as the nuclear industry. The Advection Upstream Splitting Methods (AUSM-family schemes) are very popular due to their at- tractive features for multiphase ﬂow modeling. However, the computational eﬃciency of collocated-grid-based AUSM-family schemes with explicit time integration are inferior due to a number of issues. These include the odd-even decoupling of the collocated-grid-based AUSM-family schemes for low-Mach-number ﬂows, the non-conservative characteristic of the two-phase governing equations, and the Courant-Friedrichs-Levy (CFL) number limi- tation for the explicit time integration. This thesis focuses on improving the accuracy and eﬃciency of calculation for all-Mach- number two-phase ﬂows. In order to achieve this objective, this thesis makes the ﬁrst attempt at using implicit staggered-grid-based AUSM-family (SG-AUSM-family) schemes. This is a novel approach since most work in the publicly available literature solves multi- phase compressible ﬂow problems explicitly over collocated grids. In this thesis, a four- equation generic two-ﬂuid model is mainly considered. In addition, Newton’s method with a numerical Jacobian matrix is employed to solve the implicitly discretized equations. The benchmark test cases include Ransom’s water faucet, the oscillating manometer, the phase separation, and the air-water shock tube problems. In the ﬁrst stage, after thorough mathematical analysis and numerical tests of various explicit AUSM-family schemes on collocated grids, insight into the numerical dissipation mechanism of the AUSM-family schemes was gained. This motivates the author to propose a new scheme, namely, the staggered-grid-based AUSMFVS (SG-AUSMFVS) scheme, to solve the stiﬀ phase separation problem. The second stage of the work is to examine the numerical accuracy and computational eﬃciency of collocated-grid-based implicit AUSM-family schemes. Results demonstrate that with certain time step size selections, the implicit AUSM-family schemes are superior to their explicit counterparts, in terms of numerical accuracy and computational eﬃciency. The third phase of the work is the application of the ﬁrst-order SG-AUSM-family schemes on the benchmark test cases. Results demonstrate the advantages of staggered- grid-based AUSM + (SG-AUSM + ) and staggered-grid-based AUSMDV (SG-AUSMDV) over their collocated-grid-based counterparts. With a staggered-grid arrangement, odd-even de- coupling issues can be avoided. As a result, no additional diﬀusion terms are needed when using SG-AUSM + and SG-AUSMDV schemes for low-Mach-number two-phase ﬂows. Fur- thermore, since the pressure and void fraction are already stored at the interface of the velocity control volume, no interpolation of interfacial pressure is needed for the momen- tum equations, thereby saving computational time. Finally, the SG-AUSM + scheme is capable of producing accurate solutions comparable with or even better than the corre- sponding collocated-grid-based AUSM + scheme. In particular, the new SG-AUSMFVS scheme demonstrates superb stability and accuracy for all the test cases considered in this thesis. Finally, the SG-AUSM-family schemes have been extended to second-order spatial ac- curacy using the classical Monotonic Upstream-Centered Scheme for Conservation Laws (MUSCL) approach with TVD limiters. The MUSCL technique with the van Albada lim- iter has also been implemented into the mass equation in CATHENA4. This resulted in improved accuracy of the CATHENA44 code, especially for the oscillating manometer problem. In summary, this thesis not only improves the accuracy and eﬃciency of calculation for all-Mach-number two-phase ﬂows, but also helps integrate high-resolution schemes and SG-AUSM-family schemes into staggered-grid-based thermal hydraulic codes in the nuclear industry, such as CATHENA4.