On the Evolutionary Design of Quantum Circuits 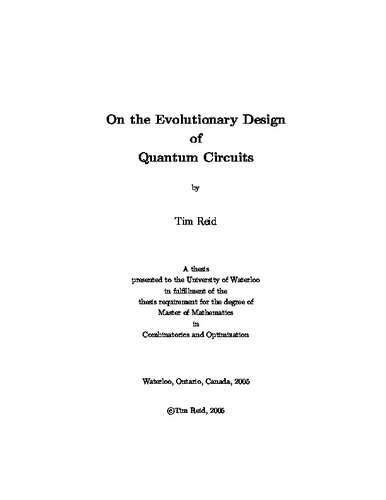 The goal of this work is to understand the application of the evolutionary programming approach to the problem of quantum circuit design. This problem is motivated by the following observations: <ul> <li>In order to keep up with the seemingly insatiable demand for computing power our computing devices will continue to shrink, all the way down to the atomic scale, at which point they become quantum mechanical systems. In fact, this event, known as Moore?s Horizon, is likely to occur in less than 25 years. </li> <li> The recent discovery of several quantum algorithms which can solve some interesting problems more efficiently than any known classical algorithm. </li> <li> While we are not yet certain that quantum computers will ever be practical to build, there do now exist the first few astonishing experimental devices capable of briefly manipulating small quantities of quantum information. The programming of these devices is already a nontrivial problem, and as these devices and their algorithms become more complicated this problem will quickly become a significant challenge. </li> </ul> The Evolutionary Programming (EP) approach to problem solving seeks to mimic the processes of evolutionary biology which have resulted in the awesome complexity of living systems, almost all of which are well beyond our current analysis and engineering capabilities. This approach is motivated by the highly successful application of Koza?s Genetic Programming (GP) approach to a variety of circuit design problems, and specifically the preliminary reports byWilliams and Gray and also Rubinstein who applied GP to quantum circuit design. Accompanying this work is software for evolutionary quantum circuit design which incorporates several advances over previous approaches, including: <ul> <li>A formal language for describing parallel quantum circuits out of an arbitary elementary gate set, including gates with one or more parameters. </li> <li> A fitness assessment procedure that measures both average case fidelity with a respect for global phase equivalences, and implementation cost. </li> <li> A Memetic Programming (MP) based reproductive strategy that uses a combination of global genetic and local memetic searches to effectively search through diverse circuit topologies and optimize the parameterized gates they contain. </li> </ul> Several benchmark experiments are performed on small problems which support the conclusion that Evolutionary Programming is a viable approach to quantum circuit design and that further experiments utilizing more computational resources and more problem insight can be expected to yield many new and interesting quantum circuits.