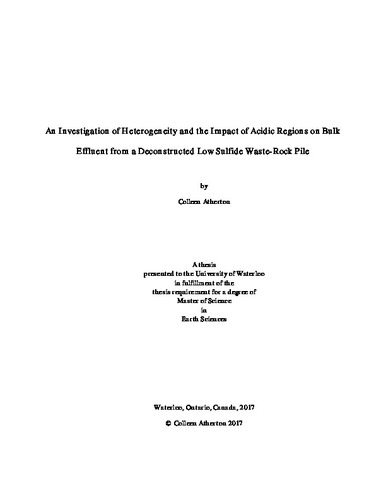 Waste rock is a potential source of low quality drainage resulting from oxidation of naturally occurring sulfide minerals. Sulfide oxidation may result in the generation of effluent with elevated concentrations of SO4 and dissolved metals and low pH. The sulfide content of waste rock is typically much lower than that of tailings; however, the large volumes of waste rock produced during mining may create a large environmental liability. Improving the understanding of the processes affecting the generation of acid mine drainage (AMD) from waste rock will facilitate improved prediction, mitigation, and remediation strategies. Three waste-rock test piles were constructed at the Diavik Diamond Mine, Northwest Territories to investigate the potential for AMD generation in a permafrost environment. The test piles were constructed in 2006 and consisted of low sulfide (0.035 wt. % S), high sulfide (0.53 wt. % S), and covered test piles. The covered test pile was constructed to model the mine closure plan and consisted of a high sulfide (0.082 wt. %) core, covered by a low-permeability layer, and a low-sulfide thermal insulation layer. In 2014, the low-sulfide Type I test pile was systematically deconstructed to investigate the geochemical, hydrogeological, and geotechnical evolution of the waste rock. Samples were collected for microbial community analysis, mineralogical characterization, pore-water extraction, ice distribution, volumetric moisture content, and particle-size distribution. The geochemical evolution of the test pile was investigated using mineral saturation index calculations, neutralization potential ratios, aqueous geochemistry, most probable number enumeration, adsorption isotherm modeling within the test pile, and mass loading calculations at the basal drain. Regions of low pH with elevated dissolved metal and SO4 concentration developed within the test pile as a result of the heterogeneity inherent in the waste rock. Sulfide oxidation rates were depressed in regions that remained frozen for a larger part of the year. Depression of sulfide oxidation rates allowed neutralization reactions within the waste rock to maintain circumneutral pH in these regions. Saturation index calculations indicate circumneutral pH regions were conducive to precipitation of Fe (oxy)hydroxides which have a large capacity to adsorb cations. Adsorption isotherm modeling indicates that adsorption of Cu, Zn, Co, and Ni on ferrihydrite can account for the observed attenuation of these metals with increasing pH. Attenuation reactions resulted in reduced mass loading of metals and SO4 in effluent compared to the higher sulfide waste-rock pile.

Colleen Atherton (2017). An Investigation of Heterogeneity and the Impact of Acidic Regions on Bulk Effluent from a Deconstructed Low Sulfide Waste-Rock Pile. UWSpace. http://hdl.handle.net/10012/11888