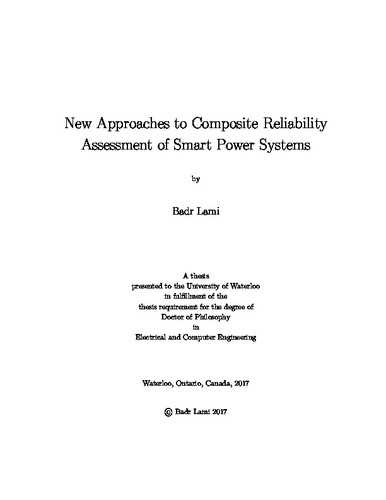 Electric power networks are complex systems because of their geographic spread and the consequent need for interconnections and integration of different components such as generators, transformers, lines, reactors, relays, and loads. Therefore, power utilities seek to ensure an acceptable degree of reliability in planning and operations, and accordingly, need information on component outages while satisfying the growing demand in order to ensure the availability of the system and prevent downtimes. Power systems of today are facing major challenges because of the rapid increase in penetration of energy resources (ERs) and plug-in electric vehicles (PEV). This thesis focuses on the evaluation of composite system reliability using direct probabilistic analysis techniques. The research presents the mathematical foundations, evaluation procedures, and reliability and risk indices associated with composite power system reliability evaluation using the minimal cut set calculations. The concept of minimal cut sets is applied to evaluate two sets of reliability and risk indices, system indices and nodal indices. System indices are essential for system planners and operators to determine the likelihood of interruption of supply, while nodal indices provide useful information on significant load points. The performance of the system under outage condition of generators, transmission lines, or both, is examined by conducting an appropriate power flow study. An optimal power flow (OPF) model is solved to find the system and nodal minimal cut sets and the associated indices. The thesis presents a novel composite system reliability based planning for ERs with clustering techniques based approaches to determine the optimal location, size and year of installation of ERs in the system. The K-means clustering and Fuzzy C-means clustering techniques are applied to the set of reliability indices, Load Not Served per Interruption (LNSI), which are determined using nodal minimal cut sets. The nodal minimal cut sets are obtained using an OPF based approach. Once the optimal sizes and locations of ERs are obtained, the earliest year of their penetration into the system is determined using an adequacy check algorithm. The thesis further presents a novel method to detect the critical components of composite power systems under steady-state conditions and short-term operations in order to help planners make economic decisions on new investments in generation capacities and transmission lines upgrades, and also to help operators maintain the delivery of electricity during system failure and disturbance events. Each component is ranked based on minimal cut set outage probability and the consequent loss of load arising from the outages of components belonging to a minimal cut set. Finally, the thesis presents a novel framework to evaluate the impact of PEV charging loads on composite power system reliability. A Smart-OPF model combined with a minimum cut set approach is proposed to evaluate the system reliability indices. Demand response (DR) is included in the proposed procedure and its impact on system reliability indices is studied. The procedure to determine the critical components of the power system in the presence of PEV loads and DR is also proposed.