The Reflexive Urban Fabric: An Investigation of the Toronto Rail Corridor 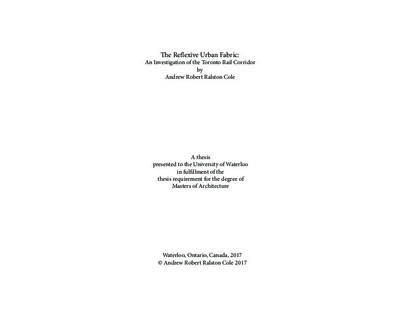 The thesis The Reflexive Urban Fabric: An Investigation of Toronto’s Rail Corridor is concerned with architecture’s role in shaping infrastructural systems into designed composite networks that respond to local, social, and ecological conditions. Infrastructural systems present a dichotomy between the technical and cultural influences that are inseparable from urban planning. They have been given technical priority over natural and urban landscapes for an agenda of higher mono-focused productivity, while also shaping urban fabrics in relation and interactions to the supplies with which infrastructural systems provide. Through the acknowledgement of historical development within downtown Toronto, the infrastructural interventions of past eras have generated spatial conditions that currently constrict the desires of potential urban growth. The city is forced to develop around these suppressing interventions, creating a tension between the growing demands of an amenity-filled contemporary city and the supply dominance of functional efficiency. The Toronto rail corridor is currently a void in the urban fabric, which is splitting the ground plane and limiting the connection between the city’s core and its waterfront. Thus, it is the exploration of reflexive infrastructural interventions along the rail corridor that attempts to reposition the role of the civic conduit and expand the perception of its performance to include social and cultural dimensions. The primary intervention focuses on the Toronto rail corridor between Bathurst Street West to Blue Jay Way. The proposal is an investigation of the role of the specialized park as an act of reflexive infrastructure, where the layering of both social amenities and technical functions produce a composite network for Toronto. The site of the Toronto rail deck park is the first intervention in a larger series of interventions to re-imagine the rail corridor as a whole into a reflexive network of designed spaces.