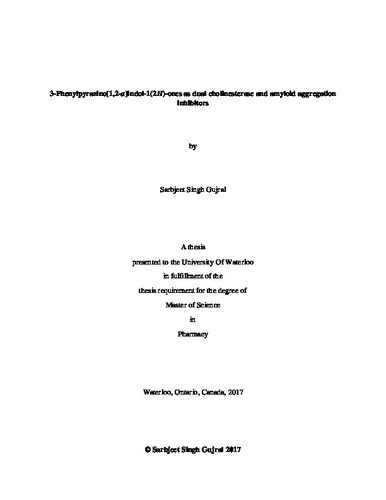 The year 2017, marks the 110th anniversary of the discovery of Alzheimer’s disease (AD)- a devastating neurodegenerative disease. Regardless of the significant advances made in the past century on the pathology of AD, the current pharmacotherapy options for AD remains woefully low and provide symptomatic relief only. Inhibitors of cholinesterase enzymes such as donepezil (Aricept®), rivastigmine (Exelon®) and galantamine (Razadyne®) which represents the primary class of agents used in the management of AD targets one of the many pathological routes of AD. Our study aims at discovering novel small hybrid molecules based on 3-phenylpyrazino[1,2-a]indol-1(2H)-one (PPI) ring system which can potentially exhibit multiple activities toward various factors involved in AD pathophysiology including (i) the inhibition of cholinesterase enzymes such as acetyl (AChE) and butyrylcholinesterases (BuChE); (ii) preventing the aggregation of the neurotoxic amyloid beta (Aβ) peptide and (iii) antioxidant properties. Initial modeling studies suggested that the tricyclic PPI template fits in the catalytic site of AChE and the C3 phenyl can orient toward the peripheral anionic subsite (PAS) in the AChE enzyme. In addition, C3-position provides opportunities to incorporate Aβ binding pharmacophores. With this goal, we synthesized the PPI compound library by coupling ethyl indole-2-carboxylates esters with 2-bromoacetophenones to obtain ethyl-1-(2-oxo-2-phenylethyl)-1H-indole-2-carboxylates which underwent an intramolecular cyclization in the presence of ammonium acetate to afford PPI derivatives (5a-n). The compounds were characterized by analytical methods including NMR and LCMS. The cholinesterase inhibition was evaluated using Ellman’s protocol by UV-Vis spectroscopy. The anti-Aβ-aggregation property was evaluated by fluorescence spectroscopy using thioflavin- T (ThT) assays. Antioxidant activity of the PPI derivatives was assessed using DPPH assay method. Transmission electron microscopic imaging (TEM imaging) were also performed to support the in vitro data obtained from ThT based fluorescence assays. The Discovery Studio (DS) software, Structure-Based-Design program (4.0) from BIOVIA Inc. was used to determine the binding interactions of the PPI derivatives for SAR optimization. Our results indicate that several compounds in the series exhibit dual cholinesterase inhibition properties; one such compound is 5h (3-(2-methoxyphenyl)pyrazino[1,2-a]indol-1(2H)-one) with IC50 AChE = 7.3 μM , IC50 BuChE = 1.9 μM. Compound 5h was found to be much more potent than reference agents donepezil and rivastigmine toward BuChE inhibition. Several other compounds such as 5d ( 3-(3,4-dimethoxyphenyl)pyrazino[1,2-a]indol-1(2H)-one) and 5h (- 3-(2-methoxyphenyl)pyrazino[1,2-a]indol-1(2H)-one exhibited excellent of Aβ40/42 inhibition (% inhibition of Aβ40 = 83.3% and 67.7% at 25 µM respectively, and % inhibition of Aβ42 = 90% and 94% at 25 µM respectively). Compound 5d and 5h were found to be more potent than curcumin and resveratrol towards Aβ42 inhibition. The PPI derivatives were also found to exhibit antioxidant activities. Unsubstituted PPI compound 5a exhibited good antioxidant activity (~33% DPPH radical scavenging at 50 μM), while, compound 5k (3-(4-hydroxy-3-methoxyphenyl)pyrazino[1,2-a]indol-1(2H)-one) exhibited excellent antioxidant activity (~ 84% DPPH radical scavenging at 50 μM). This proves the multi-targeted activities of PPI derivatives. Our results indicate that the fused tricyclic phenylpyrazino[1,2-a]indo-1(2H)-ones (PPI) represent a novel class of compounds which can be modified chemically to design and develop multi-targeting agents aimed at the cholinergic, amyloid cascade and oxidative stress hypothesis of AD.