On the Effects of Disfluency in Complex Cognitive Tasks 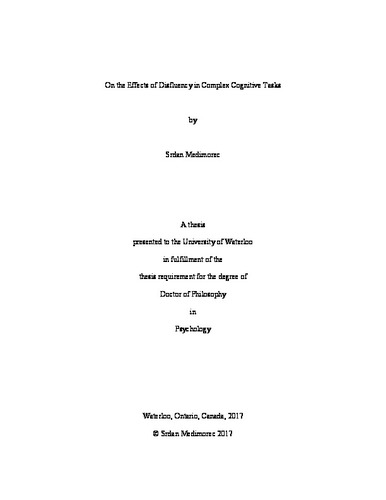 While much previous research has suggested that decreased transcription fluency has a detrimental effect on writing, there is recent evidence that decreased fluency can actually benefit cognitive processing. Across a series of experiments, I investigated the effects of experimental manipulations of transcription fluency on various aspects of essay writing (e.g., lexical sophistication), but also in the context of a single word generation task. In Chapter 1, I introduced disfluency by asking participants to type essays using one hand (vs. standard typing). The results showed that decreasing transcription fluency resulted in increased lexical sophistication. I proposed the time-based account of disfluency in composition whereby decreasing transcription fluency allows more time for lexical processes to unfold. In Chapter 2 I demonstrated that less fluent typing is not related to increased pause and revision rates. Chapter 3 provides a test between the time-based account and an account that attributes the effects to the disruption of typical finger-to-letter mappings caused by the disfluency. Here I slowed down participants’ typing by introducing a delay between keystrokes. The results presented in Chapter 3 are consistent with the time-based account. In addition, in Chapter 3 I also tested the hypothesis that, unlike in previous studies, the transcription disfluency manipulation in the current study did not introduce large working memory demands. The time-based account of the effects of disfluency in composition was further supported by the results of mediation analyses presented in Chapter 4. In Chapter 5 I investigated whether effects of disfluency on lexical selection extend beyond composition to a single word generation task. I discuss implications for writing implements, and lexical selection in composition.