Topology and interactions in Weyl metals and quantum Hall systems 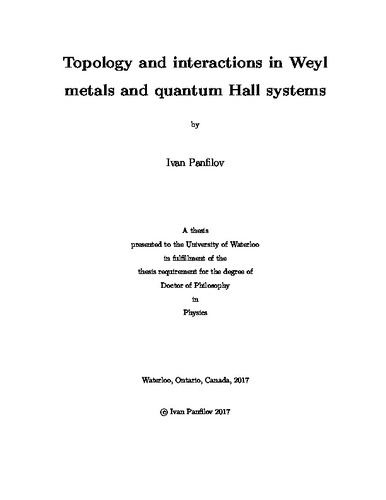 In recent years it became clear that in the Condensed Matter physics, the study of the interactions and the topology allows one to find and to describe many new phases of matter. Even more interest was drawn by the systems, where the topology is nontrivial and the interactions are not negligible, such as fractional quantum Hall effect. Therefore, in this thesis we study two examples of the interacting systems that have non-trivial topological properties. First, we consider the Weyl metals - a class of material that were suggested theoretically few years ago and observed on experiments first time in 2015. We study the behavior of the theoretical model of Weyl metal in the presence of an external magnetic field. Using the random field approximation, we show that the applied field gives the correction to the density response, that is topological in nature and is closely related to the phenomenon of chiral anomaly. This contribution manifests in a nonanalytic nonclassical corrections to the electronic compressibility and the plasmon frequency, proportional to the magnitude of the magnetic field. Such a nonanalytic correction to the electronic compressibility clearly distinguishes Weyl metals from ordinary ferromagnetic metals and hence can be used to identify the Weyl metals. Next, we study the connection between the bosonic quantum Hall systems and the lattice models. We present a mapping of a two-dimensional system of interacting bosons in a strong perpendicular magnetic field to an equivalent system of interacting bosons on the square lattice in the absence of the field. This mapping utilizes a magnetic Bloch and the corresponding magnetic Wannier single particle bases in the lowest Landau level. We demonstrate that, by construction, the ground states of the resulting model of interacting bosons on the square lattice are gapped fractionalized liquids or gapless Bose metal states with broken time reversal symmetry at speci c rational filling fractions.