Catalytic Distillation: Modeling and Process Development for Fuels and Chemicals 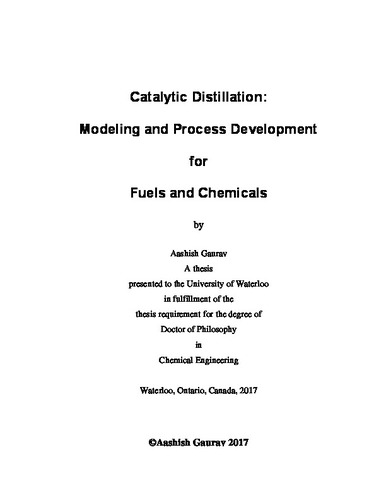 Catalytic Distillation (CD) is a hybrid green reactor technology that utilizes the dynamics of simultaneous reaction and separation in a single process unit to achieve a more compact, economical, efficient and optimized process design when compared to the traditional multi-unit designs. This thesis advances CD as a process intensification technique by presenting process design and outlining key process conditions for improving the productivity, profitability and environmental impacts of 4 chemical systems: 1) Olefin Oligomerization of isobutene to isooctane 2) Aldol condensation of acetone to MIBK 3) Hydrogenation of benzene to cyclohexane 4) Biodiesel production from soybean oil and yellow grease For optimizing process design or operation over a wide design space and at low cost, a high-fidelity model of the plant or process that is predictive over the entire range of interest is essential. Such a model could be used to optimize design or operation, exploring a wide design space rapidly and at low cost, and applying optimization techniques to determine answers. The thesis develops the first model to describe fast reactions involving a non-condensable gas such as hydrogen in a catalytic distillation process. A reaction with a Hatta number greater than one (Hatta number corresponds to the relative rate of the reaction in a liquid film to the rate of diffusion through the film) is considered to be a fast reaction. The postulate is that a hydrogenation reaction in the solid/liquid film enhances mass transfer leading to improved process performance. A reaction accelerated by “enhanced H2 concentration “via diffusion/reaction could account for the lower hydrogenation partial pressure observed in various CD systems. Hydrogenation is a reaction of immense industrial importance, particularly in the petroleum industry and the current distillation models do not include non-condensable gases. Hydrogenation at lower pressures, is a key CD process advantage reported in patent literature but a scientific study elucidating the observed phenomena was absent from literature. A new proposed film model was developed by incorporating the concept of H2 diffusion through a film in the solid /liquid interface in a three-phase non-equilibrium model developed previously in our laboratory. This film model was validated using three hydrogenation reactions that have been reported to have hydrogenations in lower hydrogen pressure, namely, the hydrogenation of benzene, the CD process for the production of isooctane via the dimerization of isooctane and the subsequent hydrogenation of isooctene to isooctane, and the production of methyl-isobutyl- ketone from acetone and hydrogen . In recent years, there has been interest to develop efficient processes for the production of biodiesel from low grade or waste oils with high free fatty acid content. An integrated catalytic distillation process design for continuous large scale biodiesel production from a feedstock with high free fatty acid and a solid acid catalyst was developed using ASPEN PLUS. Model predictions indicated that for an annual biodiesel production of 10 million gallons from vegetable oil, a CD process can result in significant savings in capital (41.4% lesser cost than the conventional process) and utility requirements (18.1% less than the conventional process). The cost of biodiesel was found to highly depend on the feedstock price and hence, in second part of the studies, a new green process for biodiesel production from yellow grease using CD technology was designed. The CD technology was found to lower capital costs by 22.2 % and utility costs by 32.3 %. The CD process also resulted in an improved catalysis, emission control and waste minimization.