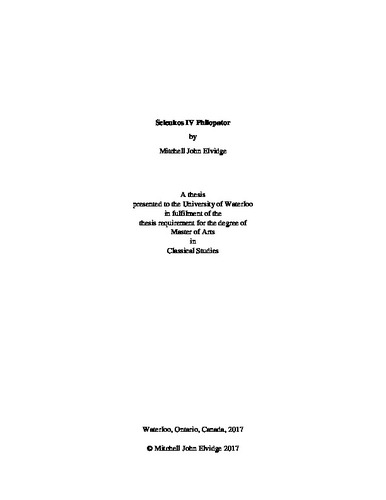 This thesis seeks to prove that Seleukos IV Philopator was a competent ruler after the death of his father and throughout his peaceful 12 year reign. Seleukos was a king who led a successful reign and led the Seleukid Empire through a challenging time of recovery and rebuilding, undeserving of any neglect or negative reputation he receives in both the primary and secondary source material. Although there are few pieces of information which directly address Seleukos, what does remain in the literary, numismatic, and epigraphic evidence supports that he was an active and prudent ruler. Contrary to the inactivity and weakness he is accused of, Seleukos did not follow the treaty of Apameia, he was able to manage the internal affairs of his kingdom, and he developed a robust foreign policy to take part in international politics. Although he is often seen only in the shadow of his father and brother, Seleukos’ reign was an important and vital part of Seleukid history.