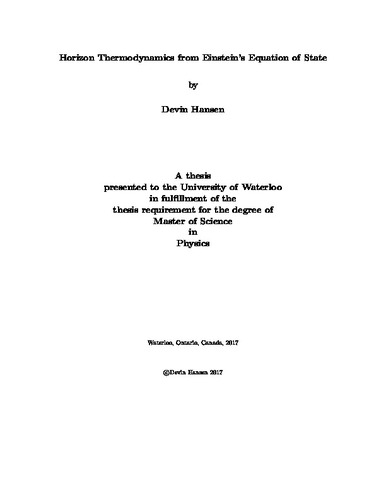 The striking resemblance between geometric theories of gravity and thermodynamics suggests a more fundamental relationship between the two seemingly distinct theories. It has been postulated that the radial Einstein equations projected onto the event horizon of a black hole are in fact an equation of state of an ensemble whose temperature is given by the Hawking temperature of the spacetime and whose pressure is the stress-energy on the horizon. We study the consequences of this postulate in detail and find several interesting results. First, we demonstrate how a cohomogeneity-2 first law can be derived from the equation of state, and find that in the process we obtain an independent definition of black hole entropy which matches the Wald entropy in several nontrivial cases. Second, we find that the spectrum of thermodynamic behaviour in this paradigm is rich and includes the standard Hawking-Page transition as well as re-entrant phase transitions, Van der-Waals transitions, and triple points similarly to what has been observed in the Black Hole Chemistry approach. Finally, we find that horizon thermodynamics does not easily extend to spacetimes whose symmetries do not sufficiently reduce the number of independent field equations. Though we do not yet have a quantitative limit to horizon thermodynamics, we find that conceptual sacrifices must be made in order to keep ignorant of conserved charges in more general spacetime backgrounds.