An Examination of the Nature of Sexual Minority Men’s Gender-Typed Sport Involvement: Exploring the Role of Gender Atypicality and Sense of Belonging 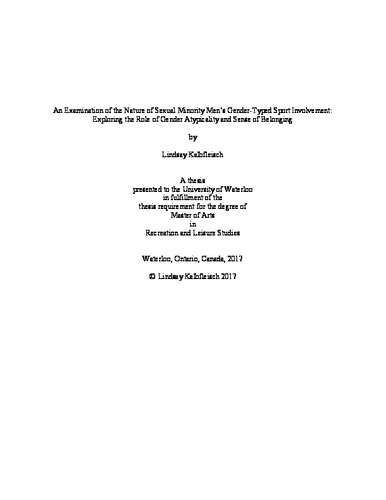 Gender stereotyping of sport has a profound impact on sport activity selection. Men and women alike are found to restrict participation to activities that are societally deemed to be gender appropriate. Despite pressure to engage in to masculine-typed sport, and the societal rewards of doing so, research shows that gay men are underrepresented in masculine-typed, team sports. Instead, some gay men seek alternative, sexual minority-specific sport environments. The current research proposes that gay men may also be more likely than heterosexual men to participate in feminine-typed sport and suggests that gender atypicality and/or sense of belonging may be factors that help to explain this gender-typed sport selection. Drawing on theories of gender atypicality and the minority stress model, the current study tests the relationship between sexual orientation and gender-typed sport participation using nationally representative sample of gay and straight men. Contrary to expectations, sexual minority status was negatively and significantly associated with feminine-typed sport participation and sense of belonging was not a significant mediator of the association of interest. However, as hypothesized, to the extent that gay men did participate in feminine-typed sport, gender atypicality was found to be an explanatory factor. Findings of this study bridge, challenge, and build upon the bodies of literature focused on sexual orientation and gender atypicality, the experiences of sexual minorities in sport, and the gendered nature of sport.

Lindsay Kalbfleisch (2017). An Examination of the Nature of Sexual Minority Men’s Gender-Typed Sport Involvement: Exploring the Role of Gender Atypicality and Sense of Belonging. UWSpace. http://hdl.handle.net/10012/11825