Stringent, open and hybrid state treatment of foreign investment: three eras of the oil industry in Venezuela and Ecuador 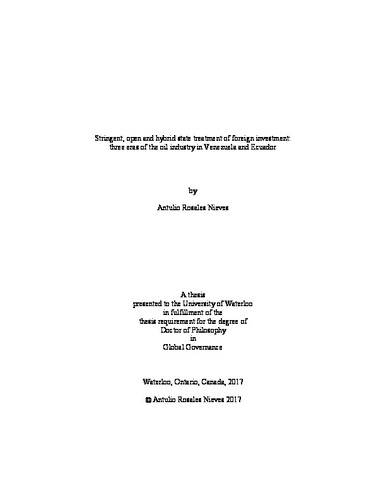 This thesis explains the development of three distinctive forms of engagement between the Venezuelan and Ecuadorian states and foreign investment since the 1970s until 2014 in their oil sectors. State treatment of foreign investment ranged from stringent in the 1970s, to open in the decades of the 1980s and 1990s, to a hybrid model in the 2000s. The broad changes that occurred in the three periods responded to factors conceptualized herein as the conditions of state-company bargaining, and the role of dominant and contested ideas. This study is accomplished through a detailed historical analysis and in-depth case studies. The dissertation incorporates and modifies insights from longstanding traditions in political science that deal with the politics of bargaining between states and transnational corporations: the Obsolescing Bargaining Models (OBM). It highlights the strategic view of states in their treatment of foreign investment through time, emphasizing states’ agency, by combining insights from the politics of bargaining, while also integrating ideational motivations, based on constructivist scholarship, in the shifts of state treatment of foreign investment historically. This perspective allows a shift in gaze from the apparent novelty of new left governments to comprehending longer-term linkages, ruptures and continuities.