Real-time Control and Optimization of Water Supply and Distribution infrastructure 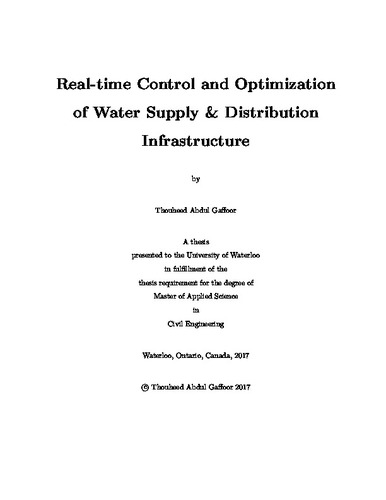 Across North America, water supply and distribution systems (WSDs) are controlled manually by operational staff - who place a heavy reliance on their experience and judgement when rendering operational decisions. These decisions range from scheduling the operation of pumps, valves and chemical dosing in the system. However, due to the uncertainty of demand, stringent water quality regulatory constraints, external forcing (cold/drought climates, fires, bursts) from the environment, and the non-stationarity of climate change, operators have the tendency to control their systems conservatively and reactively. WSDs that are operated in such fashion are said to be 'reactive' because: (i) the operators manually react to changes in the system behaviour, as measured by Supervisory Control and Data Acquisition (SCADA) systems; and (ii) are not always aware of any anomalies in the system until they are reported by consumers and authorities. The net result is that the overall operations of WSDs are suboptimal with respect to energy consumption, water losses, infrastructure damage and water quality. In this research, an intelligent platform, namely the Real-time Dynamically Dimensioned Scheduler (RT-DDS), is developed and quantitatively assessed for the proactive control and optimization of WSD operations. The RT-DDS platform was configured to solve a dynamic control problem at every timestep (hour) of the day. The control problem involved the minimization of energy costs (over the 24-hour period) by recommending 'near-optimal' pump schedules, while satisfying hydraulic reliability constraints. These constraints were predefined by operational staff and regulatory limits and define a tolerance band for pressure and storage levels across the WSD system. The RT-DDS platform includes three essential modules. The first module produces high-resolution forecasts of water demand via ensemble machine learning techniques. A water demand profile for the next 24-hours is predicted based on historical demand, ambient conditions (i.e. temperature, precipitation) and current calendar information. The predicted profile is then fed into the second module, which involves a simulation model of the WSD. The model is used to determine the hydraulic impacts of particular control settings. The results of the simulation model are used to guide the search strategy of the final module - a stochastic single solution optimization algorithm. The optimizer is parallelized for computational efficiency, such that the reporting frequency of the platform is within 15 minutes of execution time. The fidelity of the prediction engine of the RT-DDS platform was evaluated with an Advanced Metering Infrastructure (AMI) driven case study, whereby the short-term water consumption of the residential units in the city were predicted. A Multi-Layer Perceptron (MLP) model alongside ensemble-driven learning techniques (Random forests, Bagging trees and Boosted trees) were built, trained and validated as part of this research. A three-stage validation process was adopted to assess the replicative, predictive and structural validity of the models. Further, the models were assessed in their predictive capacity at two different spatial resolutions: at a single meter and at the city-level. While the models proved to have strong generalization capability, via good performance in the cross-validation testing, the models displayed slight biases when aiming to predict extreme peak events in the single meter dataset. It was concluded that the models performed far better with a lower spatial resolution (at the city or district level) whereby peak events are far more normalized. In general, the models demonstrated the capacity of using machine learning techniques in the context of short term water demand forecasting - particularly for real-time control and optimization. In determining the optimal representation of pump schedules for real-time optimization, multiple control variable formulations were assessed. These included binary control statuses and time-controlled triggers, whereby the pump schedule was represented as a sequence of on/off binary variables and active/idle discrete time periods, respectively. While the time controlled trigger representation systematically outperformed the binary representation in terms of computational efficiency, it was found that both formulations led to conditions whereby the system would violate the predefined maximum number of pump switches per calendar day. This occurred because at each timestep the control variable formulation was unaware of the previously elapsed pump switches in the subsequent hours. Violations in the maximum pump switch limits lead to transient instabilities and thus create hydraulically undesirable conditions. As such, a novel feedback architecture was proposed, such that at every timestep, the number of switches that had elapsed in the previous hours was explicitly encoded into the formulation. In this manner, the maximum number of switches per calendar day was never violated since the optimizer was aware of the current trajectory of the system. Using this novel formulation, daily energy cost savings of up to 25\% were achievable on an average day, leading to cost savings of over 2.3 million dollars over a ten-year period. Moreover, stable hydraulic conditions were produced in the system, thereby changing very little when compared to baseline operations in terms of quality of service and overall condition of assets.