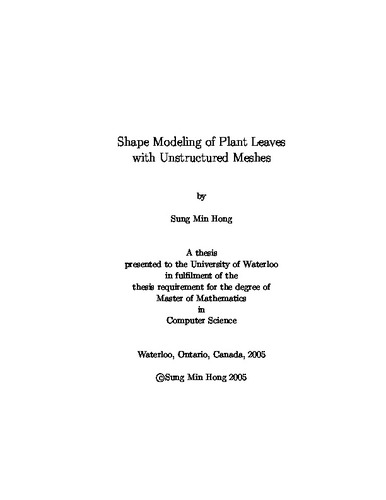 The plant leaf is one of the most challenging natural objects to be realistically depicted by computer graphics due to its complex morphological and optical characteristics. Although many studies have been done on plant modeling, previous research on leaf modeling required for close-up realistic plant images is very rare. In this thesis, a novel method for modeling of the leaf shape based on the leaf venation is presented. As the first step of the method, the leaf domain is defined by the enclosure of the leaf boundary. Second, the leaf venation is interactively modeled as a hierarchical skeleton based on the actual leaf image. Third, the leaf domain is triangulated with the skeleton as constraints. The skeleton is articulated with nodes on the skeleton. Fourth, the skeleton is interactively transformed to a specific shape. A user can manipulate the skeleton using two methods which are complementary to each other: one controls individual joints on the skeleton while the other controls the skeleton through an intermediate spline curve. Finally, the leaf blade shape is deformed to conform to the skeleton by interpolation. An interactive modeler was developed to help a user to model a leaf shape interactively and several leaves were modeled by the interactive modeler. The ray-traced rendering images demonstrate that the proposed method is effective in the leaf shape modeling.