The hydrodynamics of two-dimensional oscillating flows over ripples: the effect of asymmetries in ripple shape and currents 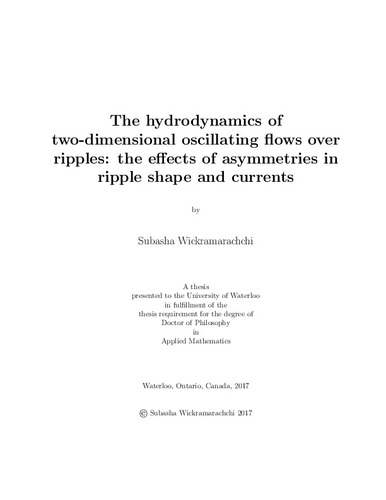 The research presented in this thesis involved consideration of three increasingly asymmetric oscillatory flows over two ripple profiles, one of which is asymmetric and represents a small deviation from a symmetric ripple. The asymmetric flow forcings are chosen so as to have an identical excursion distance. For each of these cases, the vorticity, velocity, and shear stress fields are analyzed for the first 40 cycles. The Reynolds number is mostly limited to 1250, with a few cases also run at Re=5000. During the first three cycles, it can be observed that two vortices of opposite vorticity are generated during each cycle, one each during the forward and backward flows. These vortices pair up and trace a path that extends higher up as the asymmetry of the flow or ripple shape is amplified. This effect is a consequence of the increasing difference between the vorticities of the individual vortices in each vortex pair. After about three periods, the motion becomes more and more chaotic due to the interaction of the newly generated vortices with the older ones. During the quasi-steady state, which occurs after about 25 cycles, the vortices generated remain close to the ripple and dissipate before reaching much higher for all cases except the all-symmetric case. For the asymmetric ripple and the asymmetric forcings, a consistent negative mean flow can be observed, which tends to attain a near-steady speed after about 35 cycles. During the quasi-steady state, vortex interactions with the ripple contribute a substantial amount of momentum flux to the system, as do the strong shear layers that can be seen to form at a short distance on either side of the ripple crest. The newly generated vortex pairs exhibit initial trajectories in the direction of the mean flow and are found to trace the transfer of momentum from near the ripple to area of mean current.

Subasha Wickramarachchi (2017). The hydrodynamics of two-dimensional oscillating flows over ripples: the effect of asymmetries in ripple shape and currents. UWSpace. http://hdl.handle.net/10012/11815