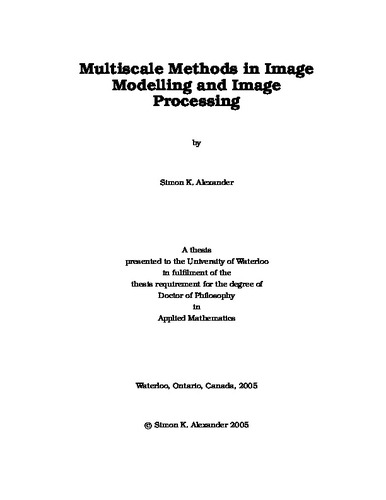 The field of modelling and processing of 'images' has fairly recently become important, even crucial, to areas of science, medicine, and engineering. The inevitable explosion of imaging modalities and approaches stemming from this fact has become a rich source of mathematical applications. <br /><br /> 'Imaging' is quite broad, and suffers somewhat from this broadness. The general question of 'what is an image?' or perhaps 'what is a natural image?' turns out to be difficult to address. To make real headway one may need to strongly constrain the class of images being considered, as will be done in part of this thesis. On the other hand there are general principles that can guide research in many areas. One such principle considered is the assertion that (classes of) images have multiscale relationships, whether at a pixel level, between features, or other variants. There are both practical (in terms of computational complexity) and more philosophical reasons (mimicking the human visual system, for example) that suggest looking at such methods. Looking at scaling relationships may also have the advantage of opening a problem up to many mathematical tools. <br /><br /> This thesis will detail two investigations into multiscale relationships, in quite different areas. One will involve Iterated Function Systems (IFS), and the other a stochastic approach to reconstruction of binary images (binary phase descriptions of porous media). The use of IFS in this context, which has often been called 'fractal image coding', has been primarily viewed as an image compression technique. We will re-visit this approach, proposing it as a more general tool. Some study of the implications of that idea will be presented, along with applications inferred by the results. In the area of reconstruction of binary porous media, a novel, multiscale, hierarchical annealing approach is proposed and investigated.