Phosphorus and Nitrogen Cycling in the Mediterranean Sea: Circulation, biogeochemistry and anthropogenic forcing 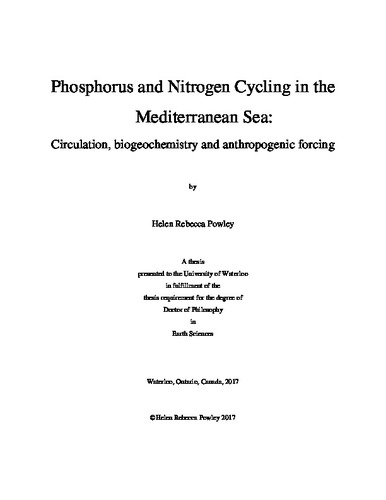 The Mediterranean Sea (MS) is an oligotrophic marine basin despite being semi-enclosed with unusually low inorganic phosphorus (P) and nitrogen (N) concentrations, and high nitrate (NO₃):phosphate (PO₄) ratios comparative to the global ocean. In addition distinct biogeochemical differences occur between the Western Mediterranean Sea (WMS) and Eastern Mediterranean Sea (EMS). Episodic deposition of organic rich sediments in the EMS indicate that fast changes in biogeochemical cycling within the MS may have occurred in the recent geological past with the development of eutrophic conditions and anoxic deep waters. Currently, close to 430 million people live within the drainage basin of the MS. The pace of population growth, coastal urbanization, land use changes and climate change are increasingly modifying hydrological and biogeochemical cycling within the MS with potential for major ecological consequences. In this thesis, a coupled P and N mass balance model is created with the goal of: (1) understanding the unique biogeochemistry of the MS and (2) delineating how anthropogenic activities and circulation affect P and N cycling and primary productivity within the MS. Anthropogenic inputs to the aquatic systems have dramatically increased since 1950. In Chapter 2, anthropogenic inputs of reactive P and N into the EMS between 1950 and 2000 were reconstructed and applied to a steady state mass balance model for P and N cycling in the EMS. The WMS provided the main source of P and N to the EMS over 1950 to 2000. Reactive P and N inputs increased by a maximum of 24% and 65% respectively over 1950 to 2000 yet primary productivity only increased by 16%. The excess P provided to the EMS after 1950 was largely exported out of the EMS through the Strait of Sicily to the WMS or stored within the deep water, maintaining the oligotrophy of the sea. Direct discharges of domestic wastewater are typically not included in mass balance nutrient models of the MS and were not included in the P and N inputs in Chapter 2. Chapter 3 used an empirical model to determine that P and N inputs from direct domestic wastewater discharges into the MS were on the same order of magnitude as inputs from rivers for the year 2003 and therefore should be included in nutrient budgets for the MS. Population growth, dietary changes and expanded connectivity to sewers were expected to further increase direct wastewater nutrient inputs to the MS in the future, especially in southern and eastern regions of the Mediterranean basin. Regionally targeted upgrades to tertiary wastewater treatment, combined with enhanced wastewater recycling and banning phosphates from laundry and dishwasher detergents, may be the most cost-effective way to prevent the expansion of coastal eutrophication. The Mediterranean region is one of the most sensitive globally to climate change but impact on the thermohaline circulation is uncertain. In Chapter 4, the sensitivity of dissolved oxygen (O₂) concentrations to climate change was assessed using a mass balance model of O₂ cycling in the MS. To achieve this, a circulation model for the WMS was created and coupled to the pre-existing EMS circulation model. Results show that the MS is unlikely to go hypoxic within the foreseeable future despite large potential changes in the thermohaline circulation. The change in the provision of labile dissolved organic carbon with deep water formation may result in a negative feedback, reducing the effects of climate driven changes in circulation on oxygen consumption. The coupled WMS-EMS circulation model created in Chapter 4 is used to create a mass balance model for P and N cycling in the MS for 1950 (Chapter 5). Direct wastewater and submarine groundwater discharges are included for the first time in a nutrient budget for the MS. The nutrient budgets for both the WMS and EMS are dominated by marine derived inputs. In addition, up to 5 times more marine derived reactive P and N entered the WMS than EMS per unit surface area and this is primary the cause of the west to east differences in biogeochemical properties observed across the MS: land derived inputs are approximately similar per unit surface area between the basins. The high NO₃:PO₄ deep water ratio of the MS is caused by the high N:P ratio of inputs, in particular atmospheric inputs, together with low denitrification rates. The low NO₃:PO₄ ratio of the inflow through Gibraltar helps drive the lower N:P ratio in the WMS than EMS. The magnitude and strength of year on year deep water formation within the MS is highly variable and the response of P and N concentrations to inter-annual changes in intermediate water and deep water formation versus that from anthropogenic enrichment is unknown. In Chapter 6, anthropogenic reactive P and N inputs into the MS between 1950 and 2030 were reconstructed and applied to the coupled WMS-EMS steady state P and N model created in Chapter 5. The anthropogenic nutrient signature of the MS is diluted by the dominance of the Atlantic surface water and exchanges across the Straits of Sicily in providing P and N to the WMS and EMS. In addition, the anti-estuarine circulation removes approximately 50% of the anthropogenic nutrients input into the MS by 2030. Consequently, anthropogenic nutrient enrichment cannot be observed in water column dissolved reactive P concentrations over the noise created by inter-annual variability in circulation. Anthropogenic enrichment of dissolved reactive N concentrations may be observed after 1970 for DON and 1990 for NO₃. Overall, nutrient inputs into the MS are dominated by laterally sourced marine derived inputs. Thus the MS behaves more like a subtropical gyre than an enclosed marine basin. The important contribution of organic matter in nutrient cycling is highlighted in this thesis with anthropogenic reactive N inputs predicted to accumulate in the DON reservoir. The MS acts as a bioreactor for organic matter cycling, converting organic nutrients to inorganic ones at depth which are then exported out of the basin by the anti-estuarine circulation. Future work should concentrate on understanding the lability of organic matter from input sources to the MS and within the water column of the MS.