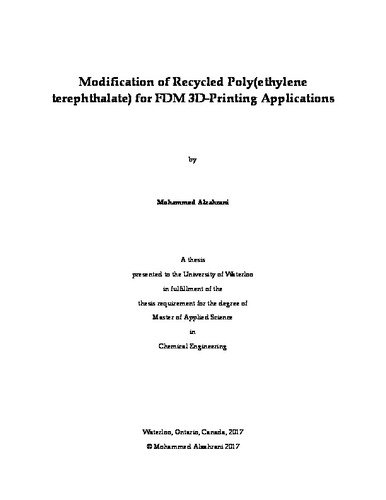 This is my revised electronic thesis (2.450Mb)

In this work, we have studied the suitability of recycled Poly(ethylene terephthalate) (R-PET) for 3D-pritning applications by studying the melt flow characteristics of the polymer. R-PET is known to experience a significant deterioration in its mechanical properties when recycled due to molecular weight loss that results from reprocessing. Lower molecular weight affects the polymer’s viscosity which hinders R-PET from being 3D-printable from two aspects. First, due to this low viscosity the melt has a low melt strength not sufficient for the filament-making process which involves pulling the melt at certain force to achieve the desired filament diameter size. Second, the polymer would have a significantly higher melt flow when extruded in the 3D-printer and that is likely to result in a very poor printing quality if not a failure for the printing task. The hypothesis was that R-PET can be modified with a reasonable effort and resources to overcome the low viscosity problem which should enhance both the melt strength and the melt flow of the polymer to become 3D-printable. Since the filament-making process involves extrusion, it was decided that reactive extrusion is the most suitable modification method to be followed. Moreover, the melt flow index test was chosen to be an indicator of suitability of a thermoplastic for 3D-printing applications. Before attempting modifying the polymer’s properties, the effect of moisture content and the reprocessing of R-PET on the melt flow index (MFI) value was studied. Results showed that for unprocessed R-PET, the MFI value was 400% higher when the polymer was not dried compared to the value obtained after 1 hour of drying. This quantified the impact that the hydrolytic degradation makes on the polymer’s melt flow characteristics. Moreover, results showed a vast difference of around 3.5-fold in the MFI value between R-PET versus reprocessed R-PET which is attributed to the thermal and thermo-oxidative degradation that occur during reprocessing. Furthermore, the MFI values of 6 commercial filaments, that include 5 different kinds of thermoplastics, were all found to be within the range of 5 ~ 38 g/10min when the MFI test for each filament was performed at the recommended 3D-printing temperature. R-PET, on the other hand, had an MFI value of around 90.56 g/10min (mean value) when tested at 260 °C. This proved that there is a significant difference in the melt flow characteristics between R-PET and 3D-printable thermoplastics. Modifying R-PET for the purpose of enhancing its melt flow characteristics was done by reactive extrusion with the chain extender PMDA (pyromellitic dianhydride) at 3 concentration levels 0.25, 0.5 and 0.75 wt%. Furthermore, single-screw and twin-screw extruders were used for compounding and the MFI results of final products were compared. MFI results reveled that PMDA has successfully increased the viscosity of our polymer when used as the chain extender. A decrease of around 72fold in the MFI was recorded when PMDA was added at 0.75 wt% which lowered the MFI of our modified R-PET to a comparable value to commercial 3D-printing filaments. Moreover, the comparison between the products processed by single-screw and twin-screw extruders showed that lower MFI was obtained when the single-screw extruder was used at PMDA concentrations of 0.25 wt% and 0.5 wt%. At 0.75 wt%, however, the product of the twin-screw extruder had slightly lower MFI. It was proposed that when 0.75 wt% PMDA was added, an excess PMDA has helped in recovering the molecular weight loss caused by several degradation routs that are anticipated to take place more severely in the twin-screw extruder. Having said that, it is worth noting that the difference between MFI obtained by single-screw and twin screw extruders at 0.75 wt% is not vary large. Moreover, the effect of copolymer SEBS-g-MA (Styrene-Ethylene-Butylene-Styrene grafted Maletic Anhydride) on melt rheology when added along with PMDA was briefly studied. SEBS-g-MA has been used as a toughening agent but it was also reported that it acts as a thermal stabilizer when processed with polymers. Our results showed that MFI was higher when the copolymer was added and, therefore, it was eliminated as an additive from our final product. Furthermore, FT-IR analysis was performed to investigate the chemical composition of our product and compared it with unmodified R-PET. Three cases were investigated including: the composition change resulted from not drying the polymer prior extrusion, the change resulted from PMDA addition, and the change resulted from addition of SEBS-g-MA. First, when the polymer was not dried prior to extrusion it is expected that hydrolytic degradation will occur and, as a result, an increase in the hydroxyl end-group content should be seen as was confirmed by the FT-IR results. Moreover, the sample that contained SEBS-g-MA in the blend showed clear signals that are associated with SEBS-g-MA. This indicates that SEBS copolymer was effectively dispersed in our polymer. Furthermore, a very mild indication was seen in the IR spectrum that suggests a lower carboxyl end-group content when PMDA was added at the highest level (0.75 wt%). This was attributed to the chain extension reaction which is known to reduce the -COOH end-group content. Finally, making a 3D-printing filament from our modified R-PET was done by mimicking the main processing stations that exist in a filament making process which are: extrusion stage, water bath cooling stage and spooling stage. After setting certain important operational parameters, including extrusion temperature and cooling water bath temperature, we were able to obtain segments of on-spec filament shape. This result was much harder to achieved when PMDA concentration was lowered to 0.5 wt% and it was impossible to be done with PMDA concentration of 0.35 wt%. With 0.75 wt% PMDA, the melt strength was satisfactory for pulling the filament by the spooler which is needed to control the filament’s diameter. Then, produced filaments were tried in a 3D-printer. A small shape was successfully 3D-printed using our filament product. It was found that the minimum recommended 3D-printing temperature is 275 °C which required, in our case, a mild hardware and software modification on the 3D-printer. Furthermore, recommendations were made to promote a smooth printing task and to enhance the quality of the print.