Gamification in a Volunteered Geographic Information context with regard to contributors' motivations: A case study of OpenStreetMap 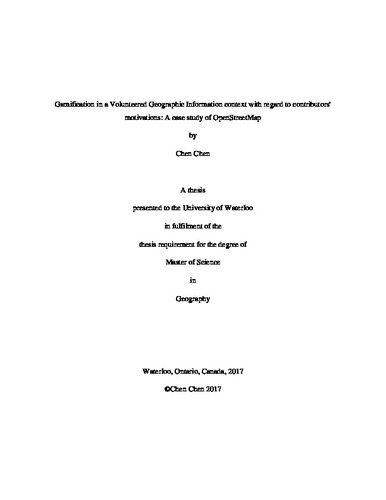 Volunteered Geographic Information (VGI) describes a new type of spatial information created by the public voluntarily (Goodchild, 2007). However, many questions persist about the quality of VGI, due to a lack of knowledge of quality assurance procedures and credibility of its creators (Flanagin & Metzger, 2008; Haklay, 2010). One solution to quality assurance is to engage more contributors and take advantage of Linus’s law that errors are more likely to be fixed given enough eyes on the issue. Gamification, which borrows game elements in non-gaming contexts to increase engagement (Deterding et al., 2011), has been practised to attract more contributors as well as assure the quality of geographic data on OpenStreetMap (OSM). Though gamification has proliferated, there is less research investigating the efficacy of those instances. This study aims to investigate the efficacy of gamification on OSM with regard to contributors’ motivations. Through online surveys distributed to OSM contributors, four major motivations to create VGI on OSM were identified: Self-need regarding community, Data Improvement, Monetary Award, and Altruism. By having follow-up interviewees with the participants, the perception of current game elements on OSM as not effective in motivating contribution was recognised. The reasons why the game elements were perceived this way include that these elements were not able to fulfil contributors’ motivations. The study demonstrates that simple transfer of game elements in VGI projects such as OSM will not lead to similar motivational affordances and engagement outcomes, and the understanding of motivations to contribute VGI is important for gamification design. In addition, suggestions for engagement on OSM are proposed: gameful experience should be focused if gamification is used; self-policing and appreciation behaviours should be promoted through new features; the humanitarian aspect of OSM should be emphasized to attract more contributors.

Chen Chen (2017). Gamification in a Volunteered Geographic Information context with regard to contributors' motivations: A case study of OpenStreetMap. UWSpace. http://hdl.handle.net/10012/11770